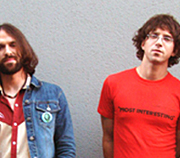 info@thetrewsmusic.com
Contact Info
Past Shows (37)
Event Photo Galleries (1)
And the music? Well it hardly seems to matter now does it? But, for the record, it?s perfect, seamless, blue-eyed soul that buggers off into chunky rock and back again with a tightness found only in nature, like an un-neutered bulldog observed from behind. Swinging, braying, good-time stuff that makes you wanna start your own band. Then you do and it?s terrible and difficult and you realize with the kind of certainty that makes suicidal madmen out of French poets that some people just have it, and you don?t.
No audio samples have been linked to this profile.

Status: Unknown
- Last confirmed Dec. 6, 2006
Submit info on this band to our admins