Join the Blue Hearts for an evening of Traditional Acoustic Blues we have Very ...

Join the Blue Hearts for an evening of Traditional Acoustic Blues
we have Very Special Guest Multiple Award Winner Terry Robb from Portland with us. He will blow you away with his amazing finger picking blues style.
For Tickets visit hermannsjazz.com
$20 advance $25 at the door plus fees/tax walk-ins welcome
Donate to support the livestream
https://artsonview.ca/donate/
stream is www.youtube.com/c/HermannsJazzClubLive

Mark "Westcoast" Comerford: Guitar & Percussion, Vocals, and Big Hank Lionhart: Lead Vocals. Mark and Hank are both members of RCA recording artists, Uncle Wiggly's Hot Shoes Blues Band who have performed all over Western Canada since their reforming of the band.
Both have been playing and recording the Blues for over 40 years with each other and in other Blues Bands. They have opened shows for Muddy Waters, Joe Cocker and more recently for Burton Cummings. In 2016, they represented British Columbia in the Solo/Duo category at the annual International Blues Challenge in Memphis, Tenn where they made it to the semi finals. This was followed by the release of their debut album Pumpin Out The Blues and performances across BC and Alberta, such as the Salmon Arm Roots & Blues Festival, Island Folk Festival, and 39 Days of July, Blue Frog Studios in White Rock, Hermann’s Jazz Club Victoria BC and they represented BC again in January 2019 in Memphis for the International Blues Challenge. They have a second CD “Two Way Street” a combination of Live recordings and Studio Cuts.
Bruce O’Neill
Bruce from Vancouver BC plays Standup an Electric Bass and sings Back Ground Vocals. He has been a mainstay in the Vancouver Blues Scene for the past 40 years.
He has work with numerous groups including The Al Wailin Walker Band and The Arsen Shomakov Trio. He currently hosts the Sunday Jam at the Church of the Blues in Dewdney at the Dewdney Pub.
His fabulous standup style is a perfect fit for the Blue Hearts and we are delighted to have him aboard.
We play Traditional Finger Pickin Blues Standards and Originals.
https://www.facebook.com/theblueheartsduo
Victoria BC

SPECIAL GUEST TERRY ROBB FROM PORTLAND
Terry Robb is hailed as a blues guitar virtuoso and one of the finest acoustic guitarists on the international scene. His signature fingerpicking style has earned him international acclaim from worldwide audiences, esteemed music critics and his distinguished peers. Incorporating elements from Delta blues, ragtime, country, swing and jazz, Robb has built a unique blues sound that has made him a legend in his prolific music career spanning four decades.   The multitude of awards Terry Robb has received speak to his seminal talent as a blues guitarist. Robb has been inducted into both the Oregon Music Hall of Fame and the Cascade Blues Association Hall of Fame. He single-handedly defined the Muddy Award for Best Acoustic Guitar, winning the prize for 19 consecutive years from its inception in 1992. In 2011, the award was renamed the “Terry Robb" Acoustic Guitar Muddy Award to honor his landmark contributions to blues music. In 2017, he received the Muddy Award for Lifetime Achievement. And Robb’s latest album, Confessin’ My Dues, garnered him a 2020 Blues Music Award nomination for Acoustic Blues Album.   Robb was born in British Columbia, raised in the United States and resides in Portland, Oregon. He achieved greatness at an early age, performing with Ramblin’ Rex of Frank Zappa / Captain Beefheart fame, Canned Heat’s Henry Vestine, and steel­-string guitar icon John Fahey. At age 24, Robb’s collaboration with Fahey led him to produce several of Fahey’s critically­-acclaimed recordings, including Let Go which earned Fahey a four-star review by Rolling Stone. As an acclaimed producer and session guitarist, Terry Robb has contributed to numerous award-winning projects, including Alice Stuart’s Grammy- and Blues Music Award-nominated album Can’t Find No Heaven.
Buy Tickets Online 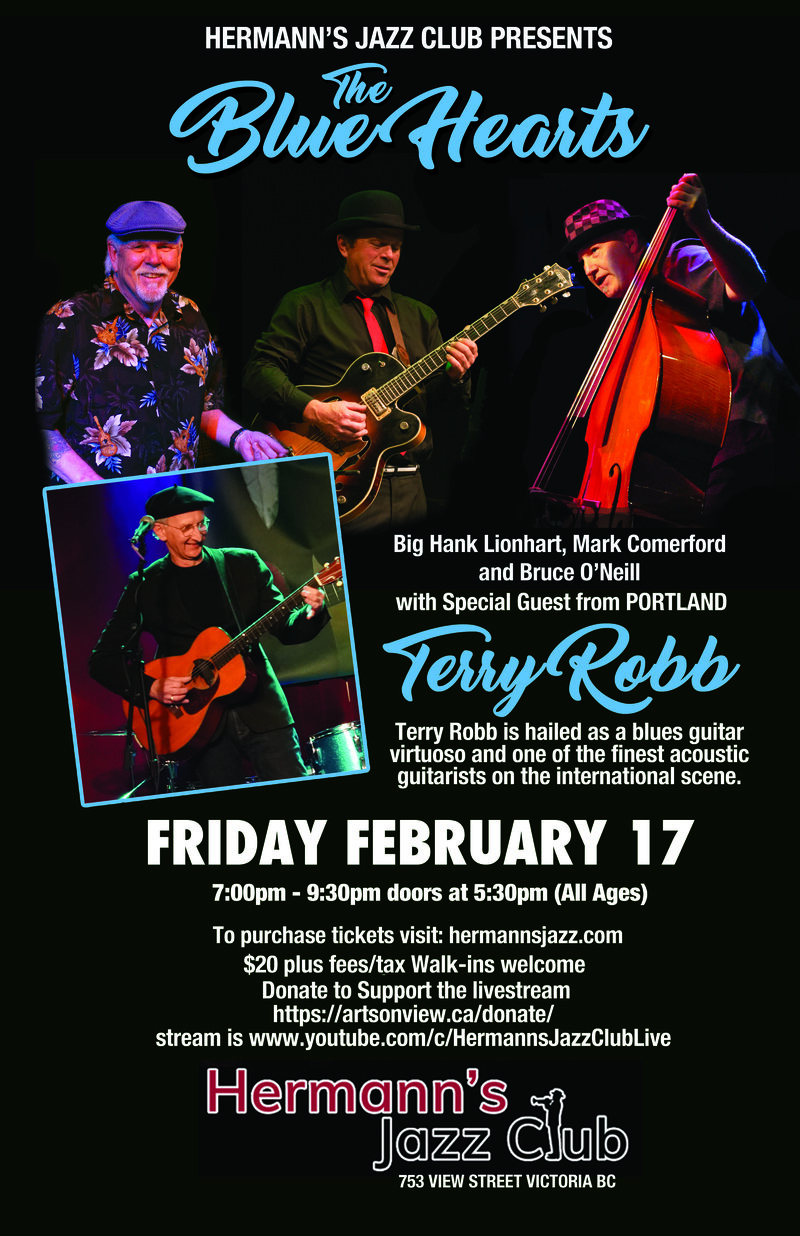