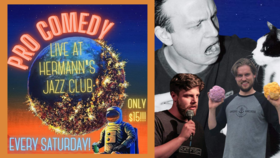 Music: Jazz / Blues
Sean Proudlove
Even as one of the most decorated and seasoned professional stand up comedians in Canada, Sean Proudlove refuses to wear socks. Ascending from club favorite to festival darling, Sean remained bare foot throughout it all. Go ahead, give him a Grammy, he won't wear socks!! Proudlove is a hilariously absurd and made to make people laugh! You won't regret seeing this weird man!

Shane Priestly
Shane Priestley has been doing standup comedy for 8 years. A regular at Hecklers Comedy Club in Victoria, he has also appeared at Tall Tree Music Festival, Rifflandia and JFL northwest. Recently has been featured on CBC LoL

Dylan Williams
Forged in the fires of tight pant friction and part time social work, Dylan Williams has a comedic style that is fresh and unique to say the absolute very least. A man on a mission to fondle your funny bone until completion, Dylan WIlliams is a satisfyingly funny comedian! A club favorite throughout Canada, see Dylan now before he leaves and refuses to talkk to you for not coming to the last show.