The Nick La Riviere Band will be back at Hermann’s Jazz Club on November 14th ...

The Nick La Riviere Band will be back at Hermann’s Jazz Club on November 14th – with a few changes to keep everyone safe! There is now a 50 person capacity. Tables are distanced, plus plexiglass is up where needed. For anyone who can’t make it to the show in person, you can check out the show on the Hermann’s livestream.

Trombonist Hugh Fraser has been a big influence on my musical career. The charismatic energy he brought to the stage was incredible, and with every note he played he could make the audience truly feel the music. He was also a great composer. His compositions captured both his energy and his ideas. He was always trying to push the boundaries of music by doing things like finding ways of incorporating the Fibonacci Sequence, a mathematical sequence that can be found often in nature (http://www.eniscuola.net/en/2016/06/27/the-numbers-of-nature-the-fibonacci-sequence/), in to his compositions. The resulting music didn’t sound mathematical – it wasn’t like the ‘intellectual’ music you can only enjoy when you think about the theory behind it. The music had feeling and flow, and could be enjoyed by anyone regardless of their musical background or their knowledge of jazz.

I first met Hugh when I was in high school, and he was doing some workshops in Victoria. Listening to him play trombone gave me a real appreciation for what the instrument could do. Some people tend to think of trombone as not being able to play fast, energetically, or accurately.. But Hugh showed me that was definitely not the case. In his hands, the trombone could be powerful, play at any speed, and be as expressive as a voice – maybe more. From a whisper to a roar, it can do it all. When Hugh started the jazz program at the Victoria Conservatory of Music, the program was off to a slow start. In fact, by the end of the first year, I was Hugh’s only student. The program later had more success, and in fact I did some teaching for it as the trombone instructor… but for most of that year, I enjoyed the benefit of a lot of one-on-one time working with Hugh.

The Nick La Riviere Band will be performing two full shows (an early and late seating) of Hugh’s compositions. I’ll be doing my best to recreate Hugh’s fantastic energy and approach to performance. This will be a very different performance from the usual ‘Nick La Riviere Band’ shows that feature my originals and more vocal/R&B/funk type tunes, but it will be a great and entertaining show nonetheless.

If you aren’t familiar with Hugh’s music, don’t let that stop you from attending. It will be great either way, and in the mean time why not check out some Hugh Fraser albums! You can also look up VEJI (the Vancouver Ensemble of Jazz Improvisation) – that’s Hugh’s big band – for more inspiration.
Get your tickets early, remember there’s a limited seating capacity for everyone’s safety. And if you can’t make it down, I hope you’ll tune in on the livestream.

During the show and after, you’ll be able to make donations to both the band and Hermann’s Jazz Club at artsonview.ca/donate. Hermann’s has been a great supporter of the arts for many years, let’s not allow COVID to put a stop to it! 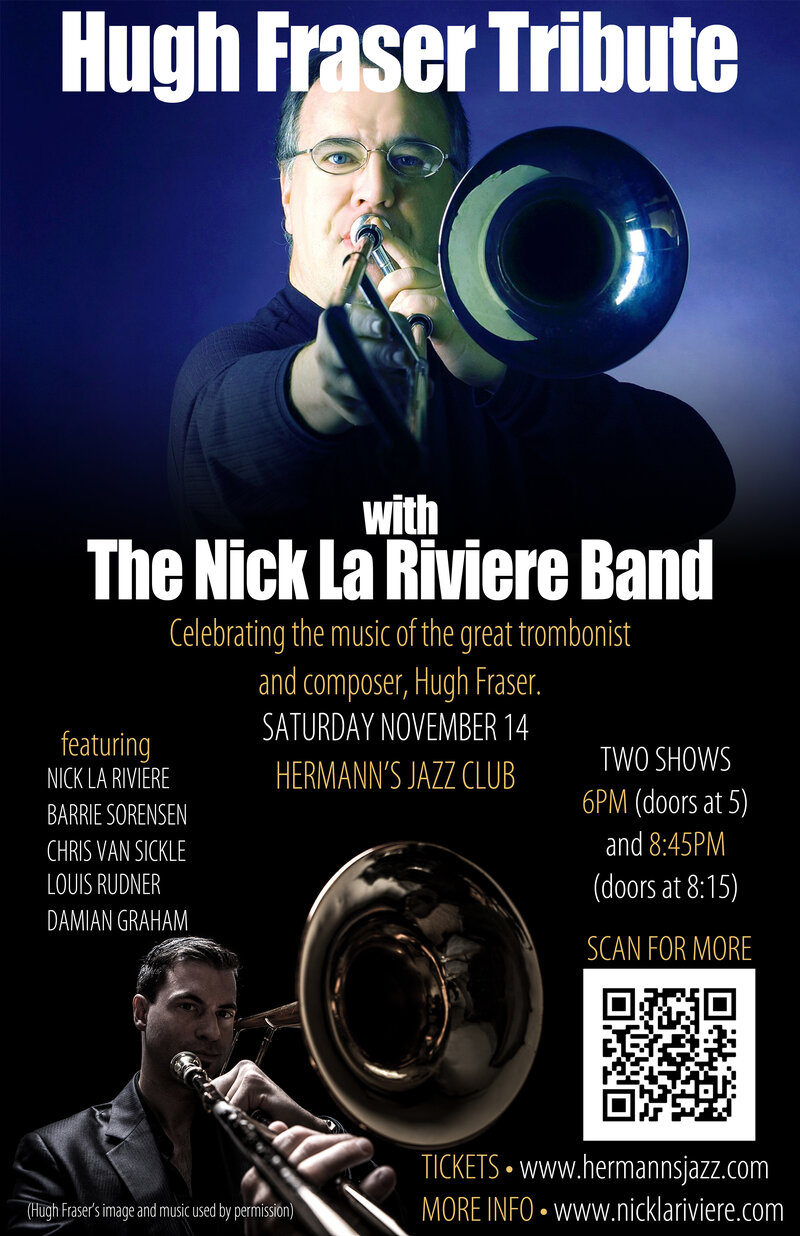