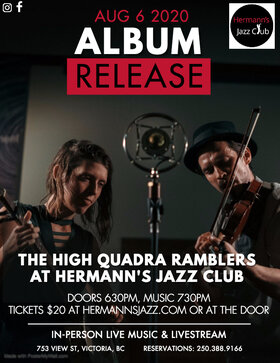 The High Quadra Ramblers are Mack Shields on fiddle and vocals and Kaitlin Chamberlin on banjo, vocals and stepdancing: a powerhouse duo keeping the magic of traditional music alive. They're doing ambitious things with appalachian oldtime, translating traditional celtic into clawhammer banjo rhythms and taking inspiration from middle eastern, french-canadian and classical to create original music. Their compositions range from high energy instrumentals to beautiful lyrical folk songs. Hailing from the East and the West, the influence of both coasts can be heard in the driving rhythm and intricate melodies of their music.

Names of band members and what they play or do:
Kaitlin Chamberlin: vocals, banjo, stepdance
Mack Shields: vocals, fiddle, mandolin