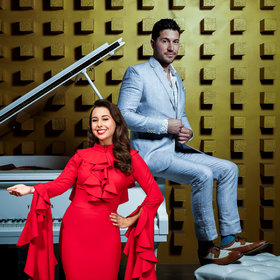 Music: Jazz / Blues
Winner of the American Jazz Pianist Competition and finalist in the Thelonious Monk International Piano Competition in 2011, Emmet Cohen is quickly forging a name for himself as a leader and composer. Whether he’s playing standards or new work, his sparkling technique and quicksilver ideas have a contemporary energy, but are deeply rooted in his respect for the jazz tradition. Cohen is often a member of Christian McBride's trio "Tip City," the "Herlin Riley Quartet," and the "Ali Jackson Trio.” He last appeared in Victoria with his trio at Hermann’s Jazz Club in 2018. With Philip Kuehn bass and Bryan Carter drums.

At age 25, Veronica Swift has become one of the world’s most sought-after jazz talents. Just before graduating college, Swift was awarded second place at the Thelonious Monk 2015 Jazz Vocal Competition. She then moved to New York in 2017 to continue pursuing her growing career, maintaining a weekly residency at Birdland Jazz Club. In addition to singing bebop and jazz classics, Veronica is also a passionate devotee of the 20’s and 30’s repertoire. This year,Swift will release her next album on Mack Avenue with the Emmet Cohen Trio. For the second half of this twin bill evening, Veronica Swift will be joined by the Emmet Cohen Trio.