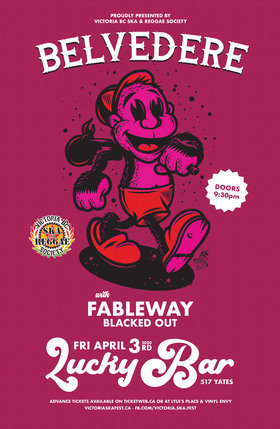 Your favourite skate punks from Calgary BELVEDERE are back to Victoria with guests Blacked Out on Friday, April 3rd at Lucky Bar. This coming April 2020 will commemorate 25 years of the band. In recent years Belvedere has been around the world playing on major festivals in Europe, South America, Canada and the US! Just recently Belvedere played in Medellin, Colombia's Altavoz Festival whom many of our Colombia ska reggae bands have played. Shortly after their west coast stop in Victoria on April 3rd at Lucky Bar Belvedere will be playing in Croatia and Pouza Festival in Montreal.

Belvedere has been playing and touring for 3 years now. They started the band when they realized that professional wrestling was getting them nowhere fast (the whole band's combined weight is about 500 pounds). So off touring the continent they went. Belvedere had been on numerous comps throughout Canada, California, Washington and Texas. They've r... more info

Fableway Is a high energy punk band who have been hoaning their live performance for 18 years. Influenced by the likes of; Propagandhi, Pennywise, NOFX, Lagwagon, Satanic Surfers, No Use For A Name , Strung Out , Guttermouth, and Jughead's Revenge more info

Blacked Out is a technical three piece punk band hailing from Banff, Alberta. They have been working around the Canadian Rockies since May of 2004. With fast, punchy songs and a genuine love for just havin' a good time, Blacked Out has built a strong and loyal fanbase in and around Banff. The band was originally created by Dicker and Morgan in a di... more info
Submit info on this show to our admins