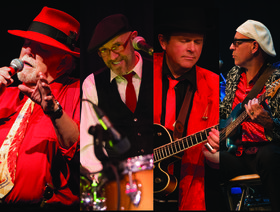 With a career that began humbly at the University of Victoria’s Sub Pub, this band led the live music, independent recording and producing scene in Victoria BC in the 80’s.  They become RCA Recording Artists, received rave reviews of live performances along the way and shared stages with Muddy Waters, Joe Cocker, James Cotton, Koko Taylor and Paul Butterfield to name a few, leaving an indelible legacy of 21 recorded tracks that still stand the test of time.

They released a new CD in 2015 called “Still Burnin it Up” and they have just come off a successful Western Tour to Alberta and BC, as well they played two hot sets on the mainstage at the Island Folkfest this past summer as well as blowing folks away at the Vancouver Island Blues Bash on the Labour Day weekend.  To top it all off they won the right to represent BC at the International Blues Challenge in White Rock in July 2014 and traveled to Memphis in January of 2015 to compete.  Check out their website here

​The Upstairs Lounge is a licensed restaurant and bar, doors open at 6 pm for dinner service, the show starts at 7:30 pm.