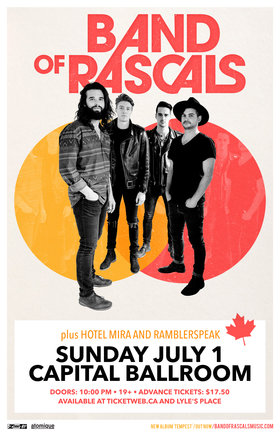 Music: Pop / Rock / Indie
“Nuts and bolts rock ‘n’ roll” is how to describe the dynamic fusion of explosive drums, driving guitars, and inimitable vocals that is Band of Rascals. The Victoria, BC based four-piece has quickly established itself as a major force in the Western Canadian music scene; the result of an overwhelmingly successful year of sold out shows, multiple festival slots and the release of their critically acclaimed self-titled debut EP.

Blending elements of hard-hitting modern rock with the vintage aesthetic of southern blues à la Kings of Leon and the Black Keys, Band of Rascals has created an evocative sound, captivating audiences of all ages. This distinct sound is matched only by their electrifying live performance. “I was absolutely blown away the first time I saw them,” said Dylan Willows (festival promoter and radio personality). As word of their energetic live performance spread, the band soon found themselves performing in increasingly larger venues to accommodate the exponential growth of their audience. The band’s captivating live show soon gained the attention of multiple radio stations, including modern rock station The Zone @ 91.3 who named them their first feature band of 2015.

Even after the tremendous success of their debut year, the band feel as though they’re just getting started. “The response we’ve had so far has been insane,” reflects lead guitarist Malcom Owen-Flood. “It’s shown us that this is just the beginning.” This holds true as the band continues to break new ground, performing in front of constantly growing audiences and new markets, writing new music, and pushing the boundaries of what defines modern rock. With their music currently seeing sales across three continents and counting, the band strives to keep pushing forward and continuing their impressive upward trajectory.