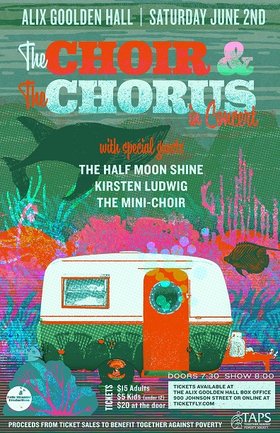 Music: Country / Bluegrass / Rockabilly, Pop / Rock / Indie
Hello Strangers Productions Presents: The Choir and The Chorus in Concert, with friends!
Victoria's The Choir and The Chorus team up again for their Spring Concert! Following a sold-out January show, both groups are excited to showcase their new repertoires in the hallowed Alix Goolden Hall. The Chorus will open the show with choral covers of songs from artists such as Lorde, Beirut, and The Bangles, and renowned local Country/Folk/Doo-Wop group Half Moon Shine will guest. The Choir will be singing from the catalogs of Radiohead, Sarah Harmer, and Alvvays, and will be joined by Kirsten Ludwig. The Mini-Choir will also perform a short set.

THE CHOIR AND THE CHORUS:
Victoria’s The Choir is a non-auditioned, community choir that sings all-original arrangements of pop, folk and indie music. What started as a small project based out of Larsen Music in early 2013 turned big in no time: 100 great people who love to sing their hearts out! The Choir has had a string of very fun and successful concerts, and performances at Rifflandia 2014 through 2017, Islands Folk Festival in 2017, and the 2015 Campbell Bay Music Festival. They've shared the stage with Fox Glove, Vox Humana Chamber Choir, Hank Pine, Adam Cohen, Kathryn Calder, Pharis and Jason Romero, Choir!Choir!Choir!, Aidan Knight and many more.
The Chorus is the sister group to The Choir, and was launched in the fall of 2017. This will be their second performance, and they could not be more excited about it!
The Choir and The Chorus are directed by Marc Jenkins and accompanied by Erin Gray. http://www.thechoiryyj.com http://www.thechorusyyj.com

KIRSTEN LUDWIG:
Although blooming from the suburbs of Calgary, AB, Kirsten Ludwig belongs to no set of roads and dwells in transition. A nomad at heart, Ludwig finds true solace in her quiet ambition, gentle voice, and mellotron- induced thoughts. With a soft demeanour and heavy mind, Kirsten Ludwig achieves simultaneous vulnerability, strength, grace, and madness.

HALF MOON SHINE:
The Half Moon Shine is a band of women from Victoria, BC, initially bound together by their love of sweet country harmonies. Since they formed in 2015 as a good old-fashioned all-female country band, it’s been all-hands-on-deck. Each gal is a songwriter in her own right and from the get-go they were delighted to hear and share each other’s songs and flesh them out with luscious four-part harmonies, guitar riffs, and train beats.

Proceeds from this show will be donated to support TAPS (Together Against Poverty Society) http://www.tapsbc.ca/

The Half Moon Shine (Alt-country/doo-wop/surf rock)

When these four gals hit the stage, expect a heavy dose of endearing banter, a juggling act of trading instruments and magically appearing trumpets, and all the sweet harmonies you could ask for. They dance between genres from alt-country train beats, to classic doo-wop vocals, and twangy spaghetti western guitars, but the songs at their core are a... more info
Submit info on this show to our admins