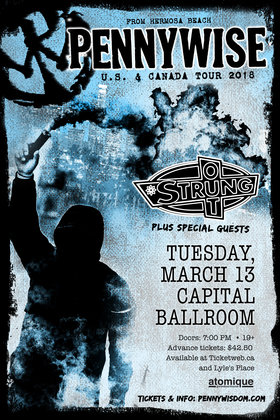 Music: Pop / Rock / Indie, Punk / Metal / Hardcore
If you think you know Pennywise, think again. While the band have made a name for themselves over the past 26 years as a politically minded melodic hardcore act who have sold millions of albums and become one of the most successful independent acts ever, they weren't always this way. In fact the group got their start playing parties in their hometown of Hermosa Beach, California, without having any aspirations of becoming one of the most successful punk acts in existence. This side of the band has never been captured until now and Yesterdays sees the band putting some of their nascent material in proper recorded form for the first time ever.

Not only is this the perfect way to welcome the band's original vocalist Jim Lindberg back into the fold but Yesterdays is also in many ways a homage to Pennywise's original bassist Jason Thirsk who wrote a bulk of the lyrics and music to these songs in the late eighties (and subsequently passed away in 1996). "Jason was the emotional core of Pennywise and his songwriting was very much about PMA (positive mental attitude) and that's really what initially drew me to the band so I can't thank him enough for that," Linberg explains. "Punk became really cynical in the late eighties so I was so excited to be a part of a band that was singing about positivity and unity."

Lindberg refers to Yesterdays as a "new album of old songs" and that's an accurate description when you consider that the band had to relearn many of the songs here from a cassette they recorded at their rehearsal space back in 1988 (you can actually hear some these original recordings at the end of the album). The remaining material consists of outtakes written during Pennywise's Full Circle and Straight Ahead era during the late nineties. However when Lindberg, guitarist Fletcher Dragge, drummer Byron McMackin and bassist Randy Bradbury recut these songs earlier this year they inevitably made them sound as urgent and as they did when they were originally written.

"I always wanted to go back and record these songs because during the Bush years we started to get a lot more political and angry—and I think that probably turned some people off but that's what we were feeling at the time," Lindberg explains. "In the back of my mind I knew we had these fun songs that were really life-affirming, it just took us 25 years to get back to it." Recorded in the band's hometown which is known for its influx of rehearsal studios and surfboard shops, Pennywise were very conscious not to overproduce these tracks in order to preserve their original spirit. "We did a couple of takes of each songs to give it a loose feel so it's a really raw album in that sense."

From the anthemic sing-along "What You Deserve" to the Minor Threat-inspired "Noise Pollution" and midtempo melodicism of "She's A Winner" (which was written as an homage to Thirsk's girlfriend at the time), it's clear why these songs got Pennywise signed to Epitaph, however even the most hardcore fans of the act will probably hear another side of Pennywise here. It's also the perfect collection of songs to bring the back together following their sold out show welcoming Lindberg back at Los Angeles' Palladium in 2012. "Instead of having the pressure to write a new album it made more sense for us to play these songs and remember what we loved about them and why we started Pennywise in the first place and I think that helped us out a lot," the vocalist explains.

Pennywise had no idea it would be helping define a whole movement when it released its 1991 self-titled Epitaph debut. But the Hermosa Beach quartet pretty much jumpstarted the whole West Coast punk thing that led to bands like Blink-182, and at a time when the slowed-down heaviness of grunge was all the rage. Eighteen years after forming, Pennywis... more info

Technical and aggressive, yet melodic and emotional. Strung Out has emerged from the cluttered Southern California music scene stronger and more creative then ever. Forming in 1992 and signing to San Francisco based Fat Wreck Chord's, one year later Strung Out had built a solid worldwide fan base through years of touring and progression as son... more info
Audio: The Exumation of Virginia Madisson, Analog, Bring Out Your Dead
Submit info on this show to our admins