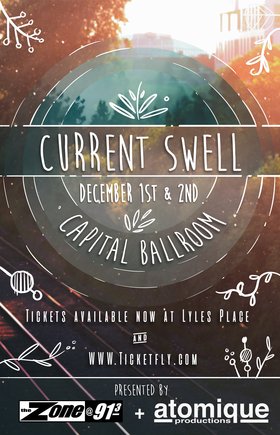 Music: Pop / Rock / Indie, Reggae / Ska / Dub
Grammy-winning producer Jacquire King (Kings of Leon, Tom Waits, Norah Jones, Cold War Kids, Of Monsters and Men, James Bay) produced Current Swells third Nettwek Records Realease, When To Talk and When To Listen. Like all good rock ‘n’ roll should, When To Talk And When To Listen touches on all facets of the human condition, from the heartbreak and spurned love of first single “It Ain’t Right” to a pair of songs about loss that form the emotional core of the album. The group as whole found a new level of confidence on the recording. Some of that can be credited to King, who pushed Current Swell to find a new side of their artistic selves, Stanton says. “He would never say something just to say it.”

A solid fanbase has taken the group across North America several times and into countries such as Brazil, where a pair of headline tours brought them to thousands of rabid fans. "We're very comfortable in certain parts of the world with our success," Lang says. "But I know this record is one that can take us to new places."

Now, it is time for Current Swell to push back. Lang says the group will take its music to the world this year, showcasing the heart and soul it took to create When To Talk And When To Listen.