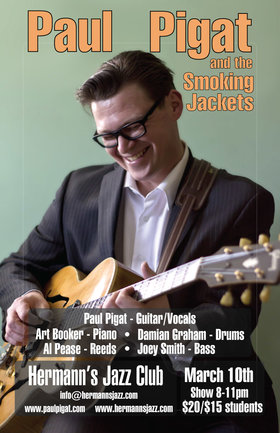 Music: Jazz / Blues
You'd never think it to look at Paul Pigat, but behind that unassuming grin and underneath those Doc Watson glasses lurks one of the most restless, combustible musical imaginations ever crammed like so much canned heat into a single body. Blessed with a jazz man's sheen, a rockabilly heart and a hobo's soul, there aren't many genres of music that don't pull at Pigat's wayfaring imagination like a magnet. Over the last several years this unassuming Vancouver native has quietly compiled a list of credits that would be the envy of anyone in the music business.

Paul Pigat is a world class performer. His singing tone is warm and luxurious like chocolate while his guitar playing is pure fire. As a side man Paul has worked with Neko Case, Carolyn Mark, Jim Byrnes and Jacob Dylan. On his own he fronts his rockabilly juggernaut Cousin Harley and numerous side projects. Come down for a rare opportunity to see this first class international talent in an up close and personal setting. Joining him onstage is the enigmatic Art Booker on keyboards, Victoria's bass super star Joey Smith, Al Pease reeds and Damian Graham on drums.

Remaining tickets will be sold at the door at 7:30pm March 10th http://www.paulpigat.com