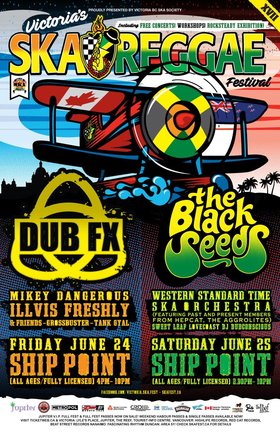 Music: Electronic / DJ, Funk / R&B, Jazz / Blues, Pop / Rock / Indie, Reggae / Ska / Dub
The Black Seeds (Easy Star Records) are one of Canada's the most beloved reggae bands from New Zealand. Their music is an irresistible blend of reggae with funk, soul, Afro-beat and other worldbeat sounds. The Black Seeds are no strangers to Canada's west coast. The Black Seeds were one of the featured acts at Victoria's 11th Annual Ska Festival and now six years later, the band is making its triumphant return to the Fest! In the time since their last appearance here, The Black Seeds have established themselves as one of the most consistent reggae acts in the world, playing festivals and headlining shows around the globe.

They'll be joined by Western Standard Time Ska Orchestra who are one of North America's premier ska orchestras. The band brings together the best West Coast ska, reggae, and jazz musicians of the last 20 years – to pay tribute to The Skatalites, the extremely influential Jamaican band that has been credited for inventing ska and paved the way for rocksteady and reggae. The band features past and present members of Hepcat, The Aggrolites, Brian Setzer Orchestra, The Debonaires and more + guest musicians from regional bands TBA.

Providing support to this Ska & Reggae spectacular will be a trio of incredible diverse West Coast acts. SweetLeaf will be bringing their hazy roots reggae to the stage in front of their hometown brethren. There's been a long and fruitful relationship between the homies in SweetLeaf and the Victoria Ska Society and we couldn't be more proud of how far these cats have come. LOVEcoast will be bringing their relentlessly sweet soulful pop sounds to the Ship Point stage. Our friends over at 91.3 The Zone honoured the soul rockers recently by naming them Zone's Band of the Month for April 2016 - a well-deserved honour for their accessible and groovy sounds. Last but certainly not least, DJ Dubconcious, one of the West Coast's foremost authorities on all things reggae (Though he recently left us for a new home in Nelson!), will be helping us get down between the live sets with his learned blend of the finest electronic riddims in the land.

Western Standard Time Ska Orchestra is the world’s premier Jamaican Jazz Orchestra. At a “standard” performance, there are more than 20 world-class jazz musicians. Featuring past and present members of bands like Hepcat, the Aggrolites, Brian Setzer Orchestra, the Expanders, and many others, WSTKO have carved themselves out a wholly unique sp... more info
Audio: Artibella (feat. Greg Lee & Alex Desert), Dick Tracy, Red Is Danger

DJ Dubconscious has come to represent both the east and the western coast of Canada. Born in Toronto & raised on the jungle & drum’n’bass sounds permeating the city in the late 90s & early 2000s, he developed a taste for hard beats drenched in reggae vibes. has appeared at numerous music festivals including BC's Shambhala, Bass Coast, Diversity... more info 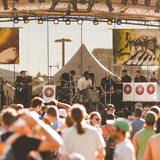