Garage, psych, other from Nanaimo BC
Available for Shows/Gigs

psychedelic from Victoria BC
Available for Shows/Gigs

note new location, some old posters will have 'Intrepid Theatre Club', some online sources still list 'Logans' but now UPstairs so sorry its no longer all-ages but the space is bigger!

After performing with such bands as Toho Sara, Ohkami No Jikan, Musica Transonic, and Mainliner, Japanese guitarist Makoto Kawabata decided to continue his musical explorations by bringing together like-minded individuals to create trippy psychedelic freak-outs inspired by Karlheinz Stockhausen, Krautrock, and '70s progressive hard rock. Acid Mothers Temple & the Melting Paraiso U.F.O. (Underground Freak Out) were founded in 1996 as a "soul collective." It's not a commune in the full sense since the members don't all live together, but it is based on communal values and has even been mistaken by some people for a religious cult.

Kawabata started the collective because he wanted to give unknown musicians a chance to record and release albums that would reach a wider audience; his original intent was not to create an ongoing touring and recording band. Indeed, the group's self-titled debut album, which was released on Japan's PSF Records in November 1997, was essentially a Kawabata solo project. He performed jam sessions with several other musicians, then edited and overdubbed the tapes to create something akin to musique concrète. Kawabata must have been pleased with the results, because he assembled a group of musicians to tour overseas as Acid Mothers Temple in 1998.

Atsushi Tsuyama played guitar during a November 1998 Japanese tour and became the group's regular bassist in 1999. Eventually, the band's steady touring lineup solidified around Kawabata, Tsuyama, guitarist and synthesizer player Higashi Hiroshi, drummer Ichiraku Yoshimitsu, and vocalist and synthesizer player Cotton Casino. Buoyed by a well-deserved reputation as a superb live band, the group continued to tour and record. They released Wild Gals a Go-Go, the soundtrack to an uncompleted Russian underground film, in 1999, and Live in Occident, a double album of performances from their 1999 overseas tour, in 2000. Acid Mothers Temple continued to expand their range of influences; for example, they drew on Tsuyama's experience performing ancient folk music for La Nòvia, an album of Occitan traditional songs that they released in 2000. Then, in 2001, they released their fourth "official" album, New Geocentric World of Acid Mothers Temple, as well as a couple limited-edition releases. Meanwhile, the collective has spun out numerous offshoots, including Floating Flower, Nishinihon, and Tsurbami.

Terry Riley: In C
Many of these spinoffs appeared on the three-CD Do Whatever You Want, Don't Do Whatever You Don't Want. Released in 2002 on the Earworm label, the set featured Acid Mothers Temple music on the first disc and all the different side projects on the remaining two discs. The year 2002 ended up being an especially busy time for the band, with numerous releases including the concept album St. Captain Freak Out and the Magic Bamboo Request and their version of classical composer Terry Riley's groundbreaking In C. Magical Power from Mars landed in 2003 and collected some no longer available limited-edition 3" CDs. Mantra of Love from 2004 saw Cotton Casino exit the lineup and they changed their name temporarily to Acid Mothers Temple & the Cosmic Inferno. The band kept the ambitious release schedule going with both Just Another Band from the Cosmic Inferno and IAO Chant from the Cosmic Inferno in 2005. After adding drummer Shimura Koji to the roster, Acid Mothers Temple released Starless and Bible Black Sabbath, Have You Seen the Other Side of the Sky, Myth of the Love Electrique (featuring the voice of new female singer Kitagawa Hao) in 2006. 2007 saw the return of the name Acid Mothers Temple & the Melting Paraiso U.F.O. and the issue of the albums Soul of a Mountain Wolf, Crystal Rainbow Pyramid Under the Stars, Acid Motherly Love, and Stones Women Records. The latter three were issued simply by Acid Mothers Temple (the reason behind the various name changes is a mystery known only to leader Makoto Kawabata. 2008 was, as is now typical for the group, another prolific year. The AMT collective issued no less than four albums beginning with Journey into the Cosmic Inferno, and continuing through Glorify Astrological Martyrdom, Pink Lady Lemonade (a suite long reprise of their original composition), and Recurring Dream and Apocalypse. The release schedule proved equally relentless in 2009 with no less than four albums on as many different labels seeing release: Interstellar Guru and Zero, Dark Side of the Moon: What Planet Are We On?, Are We Experimental?, and Lord of the Underground: Vishnu and the Magic Elixir. These oofficialreleases contain only part of the story, however. Both Makoto and AMT also released countless singles and compilation tracks available in very limited editions, have reissued catalog albums on different labels than the ooriginalreleases appeared upon, and have cut live recordings for sale only at shows, making finding their complete set of recordings virtually impossible. The band commenced their release schedule in 2010 with Album: In 0 to Infinity (credited to Acid Mothers Temple/Acid Mothers Temple & the Melting Paraiso U.F.O./The Melting Paraiso U.F.O.) on the Important imprint. 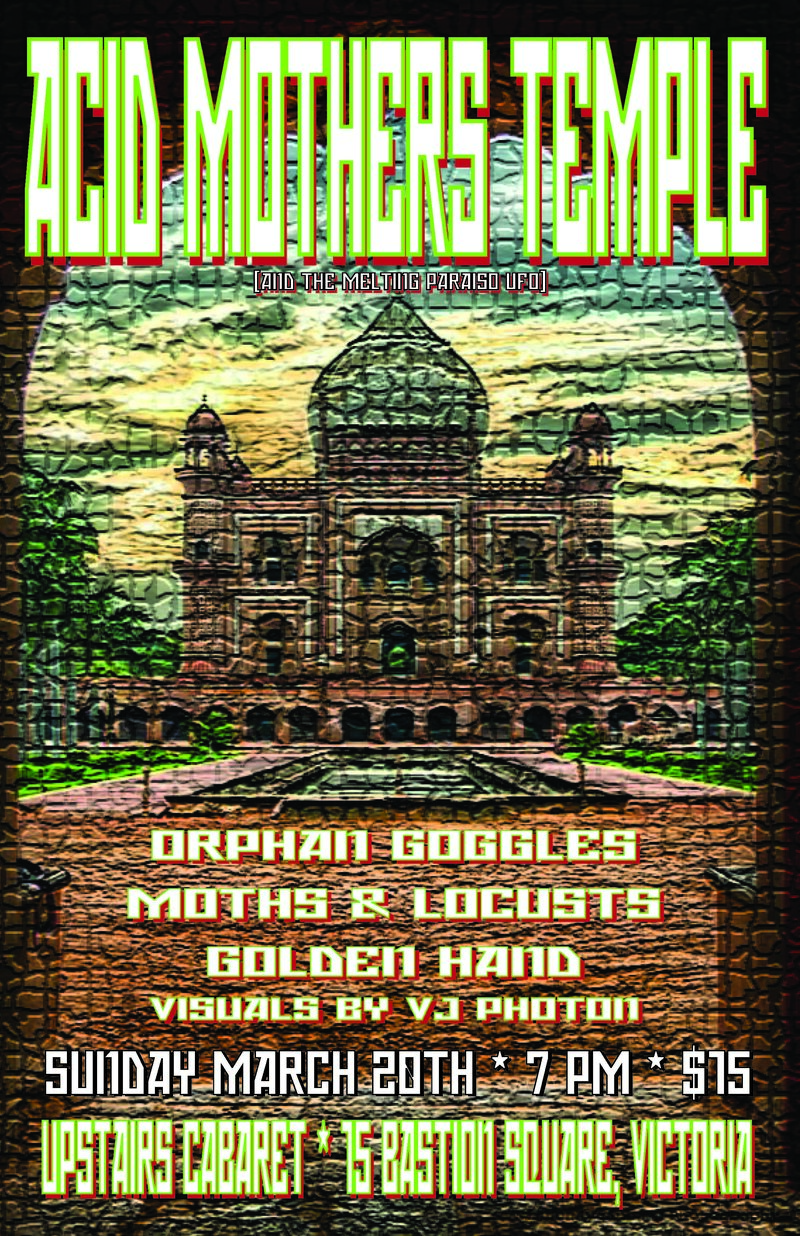