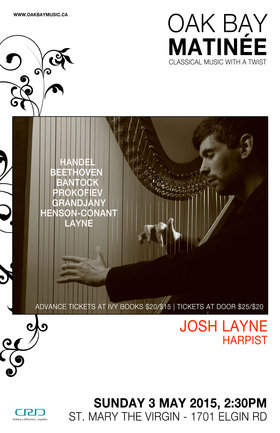 Music: Classical, Jazz / Blues
Victoria harpist Josh Layne has been called a ‘harp genius’ and a ‘consummate musician’. He is preparing for recital performances in Rio de Janeiro, but Oak Bay audiences will be served first with his May 3rd appearance at Oak Bay Matinee. With works by Handel, Beethoven, Grandjany, Layne, Prokofiev, Bantock and Henson Conant.
Advance tickets are available at Ivy’s Books, and online. Tickets are also available at the door. For more information go to http://www.oakbaymusic.ca

Harpist Josh Layne (1977-) offers an unforgettable and exciting concert in recital, school and community settings. Josh's intensity and focus, as well as his incredible technique and outstanding musicianship, make his playing something not to be missed. more info

Saxophonist Erik Abbink has performed as a chamber musician in Canada, the United States, the Netherlands, Germany, France, Poland and Turkey. He appeared for Sonic Boom Vancouver, The Netherland Wind Ensemble, Percussion Group The Hague, Aventa Ensemble, and Redshift. As an orchestral musician he appeared with the Rotterdam Philharmonic Orchestra,... more info
Submit info on this show to our admins