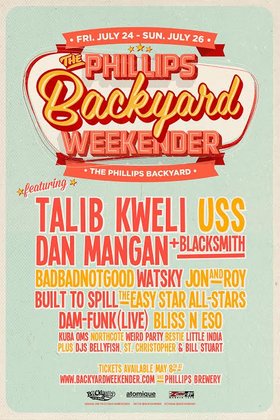 3-Day Passes and Single-Day Tickets are ON SALE NOW!
Available at backyardweekender.com or in person at Phillips Brewery (2010 Government St.)

Disguised as a brewery parking lot by day, the Phillips Backyard magically transforms into an outdoor music super-party for three unforgettable nights. Set against the backdrop of our beloved local craft brewery in the open air of downtown Victoria's communal backyard, The Phillips Backyard Weekender is a summer highlight not to be missed.

When Built To Spill wanted to find out what their music sounded like they locked themselves in Doug Martschs garage. Without a tentative conclusion or even a hypothesis the four members began to experiment. Their collaborative efforts lasted seasons and yielded dozens of hours of ADAT tape. The album You In Reverse documents the newest branch of Bu... more info
Submit info on this show to our admins