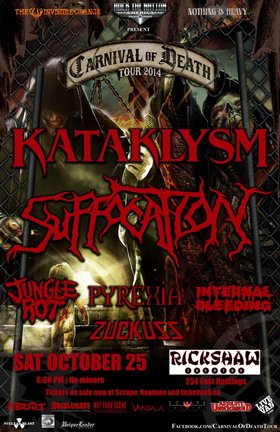 The Carnival of Death Tour 2014

other sites: google | spreadthevenom | myspace | nuclearblast
It was 1992 when the Canada-natives clawed their way up the underground death metal ladder. With one goal and one goal only - to mercilessly spew forth only the most punishing music known to earthly ears - they combined melody with brutality into one, devastating force. more info
Articles: LiveVan Review - Kill The Elite Tour (Kataklysm, Aborted, Archspire and Death Toll Rising at the Rickshaw Theatre), Fleshgod Apocalypse, Krisiun and Kataklysm, 13th January 2014 The Underworld
Videos: 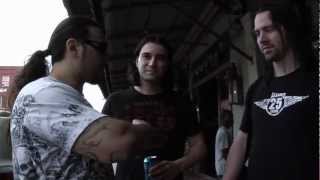 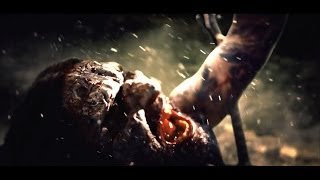 other sites: google | myspace | mocospace | jsrdirect | tinyurl
Few bands can be credited with creating a legacy, however, legendary New York based extreme metal outfit SUFFOCATION have done just that. For 20 years now SUFFOCATION have been creating music that has become the very standard by which we judge all things extreme. Their fusion of technicality, groove and sheer unrelenting brutality has been imita... more info
Videos: 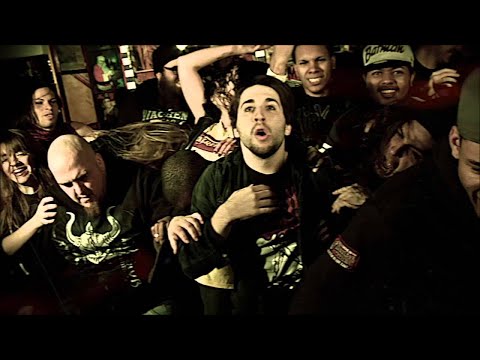 other sites: myspace | victoryrecords | ourstage | purevolume
The Midwest based quartet JUNGLE ROT have garnered a large and loyal following within the last 10 years due in large part to having a style more similar to acts such as Slayer and Sodom, rather than the typical Cannibal Corpse and Suffocation rip-offs that the underground extreme music scene is so oversaturated with. The sound and attitude that JUN... more info

PYREXIA is currently in the studio recording their latest material for the 2013 release , "Feast of Iniquity" on Unique Leader Records. An epic production unlike anything heard in the genre , PYREXIA embraces a path of constant attack and unforgiving song structure. With the addition of Doug Bohn (Suffocation/"Pierced from within") performing on Dr... more info