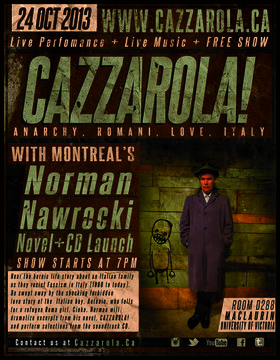 Music: Electronic / DJ, Folk / Celtic / Latin / World Theatre:
CAZZAROLA! CANADIAN TOUR 2013 is quickly approaching. Begining in October, the acclaimed author/musician/actor Norman Nawrocki will be traveling to a Canadian town near you as he launches his first-ever novel & brand-new soundtrack, both titled, CAZZAROLA, Anarchy, Romani, Love, Italy. Learn about the 130 years-spanning resistance of an Italian family as they engage in heroic resistance to Fascism in Italy and be swept away by the shocking forbidden love story of the Italian boy, Antonio, who falls for a refugee Roma girl, Cinka, as Norman dramatizes excerpts from CAZZAROLA!, playing several characters from the book, and performing selections from the album on his looped and sampled violin. Where possible, the event will also include a round-table discussion with local representatives from Roma and immigrant, refugee, and migrant worker communities.

other sites: tumblr
Norman is an internationally acclaimed cabaret artist, sex educator, actor, and musician, and has released over 50 albums. He is also the author of several books of poetry and short stories. He teaches in Quebec at Concordia University, about how to use the arts for community organizing and radical social change, gives workshops about “creative ... more info
Submit info on this show to our admins