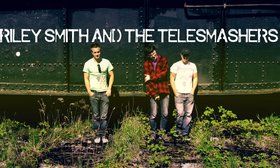 Riley Smith is a 28 year-old pop/rock/alternative songwriter from Victoria, BC. He began writing songs at the age of fifteen after playing guitar for just six months. As a seventeen year old, Smith experienced the joy of playing guitar on stage with Green Day, his all-time favourite band. But he didn’t manage to do this just once- he did it three times (2002, 2004, and 2005). He was lucky enough to be given two guitars as a “thank you” from Green Day front man Billie Joe Armstrong. These were phenomenal, inspirational experiences for Smith, and really threw him into a songwriting frenzy for the next several years.

HITE HOT JET is a Canadian all-girl rock band hailing from Victoria BC. They came together through a series of intriguing events…craigslist ads, chance meetings at vocal workshops and cafes, auditions, and a Fort Saint John-Victoria connection. One of the band members even happens to have a horse named ‘Jet’(which she has had for many years, since before the band even existed). They’ve only been together for a few short months and they are already generating a buzz. Witnessing the chemistry between these young women – on stage or off – you would think they’ve known each other their whole lives. WHITE HOT JET has showcased at the Vancouver Island Music Business Conference, are on the cover of the debut issue of Go Big or Go Home Magazine (July issue), and they have just released their debut single Never Coming Down.

Brewed up in August 2012, constructed by local students and named after a bus route. Dogwood Line is prowling about, spending equal time locked deep inside the earth practicing and emerging to try and make friends. Nick, Kristina, Andrew and Ian. more info
Submit info on this show to our admins