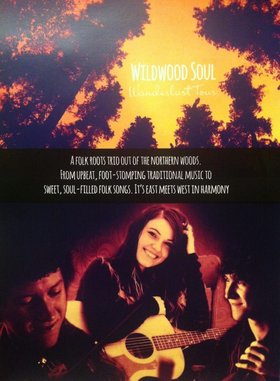 Music: Folk / Celtic / Latin / World
Hailing from the small towns of Taylor, BC and Desbarats, ON, Wildwood Soul, is a folk music trio who perform original songs with a mixture of traditional songs and fiddle tunes. In the spring of 2013, the group will be bridging the 3000 km gap between where they each call home. Coming together, they will embark on a cross Canada tour which will begin in northern BC. This trio offers a variety of instruments from guitar and fiddle to banjo and cello. They are a young trio of individually accomplished musicians who perform a unique and tasteful blend of instrumental sounds coupled with interesting vocals and beautiful three-part harmony.

Lorissa Scriven, 23, of northern British Columbia is a singer-songwriter and guitarist with a knack for making music in a style all her own. With a very unique presence, Lorissa brings to her live performances a piece of her soul to share with all. She is a free spirit with an old soul paired with a gentle voice, thoughtful lyrics and a wave of positive energy thrown into the mix. Lorissa has opened for a wealth of notable acts such as Hotel California, Nine Mile, Miss Quincy, KIRBY, Deere John, Rik Leaf, Poor Young Things, Michael Bernard Fitzgerald and Aaron Pritchett. In the spring of 2010, she earned the title 'Winner of RocKin the Peace 2010', a regional, original music search. Shortly after, she recorded her debut album with Juno award winning producer Josh Rob Gwilliam. Her album, Be the Change, has been described as kind of folk, a little bit country and mildly rocked up all the while maintaining the rootsy feel from which it all began. The album was released and successfully launched September 18, 2010. Lorissa is now in the final stages of her second album which will be released and available on this tour.

Zach Schryer-Lefebvre, 22, of northern Ontario is a singer-songwriter, accomplished guitarist, cellist, pianist, visual artist and music teacher. He, along with his family band, The O'Schraves, are in the final stages of producing an album which will be released late summer 2013. Zach has toured with The Brian Pickell Band, a band of well-respected Canadian artists from northern and southern Ontario. Zach attended Algoma University where he took the music program. He has also been trained as an acoustic guitar luthier and handcrafts unique guitars with customized wood burnings. Zach and Lorissa will both play one of these guitars on their spring tour.

Benoit Schryer-Lefebvre, 18, also from northern Ontario is a fiddle player, banjo player and singer. He and Zach have been playing music together for over ten years as a duo as well as with their family band. In addition to his family groups, he has also toured with The Brian Pickell Band. He is the two time Pembroke Fiddle Competition Champion - the second largest fiddle competition in Canada. He comes by this honestly, following in his uncles' footsteps - the Schryer Triplets. Benoit is a fiddle/violin teacher and a well-established tenor banjo player, as well as a singer. He studied both fiddle and banjo in Ireland and has become proficient with both, keeping up with some of the best players in both Canada and Ireland.