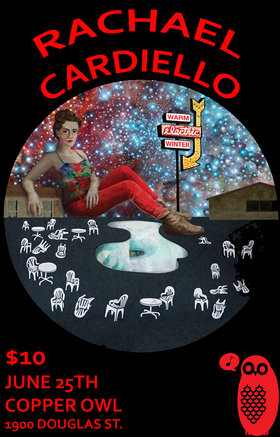 Rachael Cardiello was born in Tornado Alley but raised between mountains outside of Helena, Montana. Trained as a classical violist at the University of Victoria in British Columbia, her music invites comparisons to many innovative songwriters and is rooted in a strong drive to mess with the boundaries between genres as diverse as pop, alternative folk, rock, country and soul.
Currently based out of Toronto, Ontario, Cardiello has been touring across Canada and the States for over five years as a solo and collaborating artist. While living in Victoria, Rachael formed one half of Blue Richard and the Apricots: an acoustic duo with fellow violist, singer-songwriter and cabaret phenomenon Anna Atkinson. They continue to collaborate on special occasions in Toronto. For two summers, Cardiello toured with the Tequila Mockingbird Orchestra with whom she created the multi-media opera, There Once Was a Girl. Presented by Ambiguous Arts to a sold-out audience in Victoria’s Metro Theater, There OnceWas a Girl was the telling of “Crazy Legs” a children’s book Rachael wrote in the winter of 2009. Cardiello most frequently collaborates with her husband, Canadian songwriter and guitarist James Burrows.
In 2011, Cardiello officially released her EP One for the Wind: a collection of five songs on layered viola, piano and voice. With the recent release of Warm Electric Winter, Cardiello breaks away from her folk-music roots with a full band and an electric sound. Recorded in the Spring of 2012 in The Galaxy Smith Recording Studios of Brooklyn, New York, this album stretches Cardiello's songwriting across a four piece horn section and an old, 1960's girl group sound. It is Cardiello’s first full length album and her official debut in the International music scene.

$10 at the door
copper owl is cash only