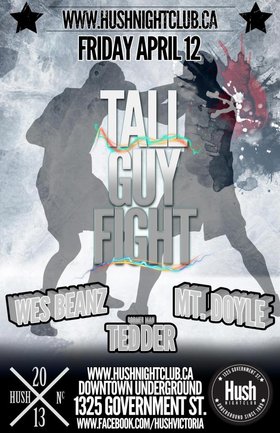 28 year old Wesley Bain began his love affair with bass music in 2002. As a newcomer to the thriving electronic music scene of Vancouver Island, he started collecting breakbeat vinyls from the dwindling record stores of downtown Victoria. Several thousand dollars later, he landed his first gig in June of 2004 at Hush Nightclub. Five years later, after playing dozens of bush parties, countless club nights opening for the likes of The Stanton Warriors, Chase and Status, The Freestylers and Nick Thayer, (to name a few) he won the annual DJ Competition at the same club. Wes then played 3 years in a row at Ucluelet's Soundwave Festival, twice at Victoria Electronic Music Festival, Tall Tree Music Festival, and held down a residency, "OH GREAT!... It's Monday!" at Hush for 2 years. In 2010 Wes finally decided to pick up Ableton and start producing his own beats. After moving back to his hometown, Vancouver in 2011, he was quickly brought to the attention of Florida's "Kick It Recordings" and Vancouver's "East Van Digital" and signed to these labels for his original productions. These days Wes spends his spare time creating music in his "studio" as a hobby in his apartment.

Over the years, WesBeanz' taste in music has always been recognized by two extremly important components: Melody and Bass. He is known for his explosive energy when DJing, and for his ability to send a crowd into cosmic heights using a variety of genres. His always unpredictable sets promise sweaty, crunchy, emotional, melody-driven, energy-packed music with massive build ups and breakdowns. In the beginning he was a Breaks DJ, these days you can expect Dubstep, Glitch Hop, Midtempo, Drumstep, Trip Hop, Drum and Bass, House..... you name it, WesBeanz plays it. Except Trance.

Mt. Doyle is a product of his environment...The outstanding electronic music scene of Victoria, BC. Years of unruly beats and basslines from not only the city’s but the world’s finest DJs and producers have forged him into a bomb-dropping, mob-hyping DJ who keeps fans bouncing with whatever it takes. From funk to drum and bass, you name it, he’s killed crowds with it. In his first year of DJing Mt. Doyle brought his unique blend of musical delicacies to Vancouver Island’s Tall Tree Festival, advanced to the semi finals of Hush’s DJ Challenge and shared the stage with international heavyweights Aphrodite, Parker and Netsky, not to mention some of B.C.’s finest. With a mountainous lust for music and a keen ear for whatever bumps, Mt. Doyle will keep bodies moving any time any place with whatever the hell he wants.

Dubby Bass Lines, Jazzy Riffs and Pure Soul are just a few of the influences that have shaped the style of DJ Tedder. Musical since his childhood in South Africa, born in Zululand, Morgan Tedder moved to Canada at the age of 10. Tedder began DJing in 2002 and has been in the foreground of Liquid Funk on Vancouver Island ever since. His Soulful Dub selections and smooth mixing have moved dance floors throughout BC and he has played alongside the likes of Calibre, LTJ Bukem, London Elektricity, T Power, Marcus Visionary, and Benny Page to name a few. Tedder is the founder of Liquidfunk.ca, long-time resident DJ at Whitebird Lounge, regular Drum n' Bass DJ at Hush Nightclub, as well as a staple on the Liquid Soul Stage at Soundwave Music Festival on the West Coast.


Brought to you by Hush Nightclub. http://www.hushnightclub.ca