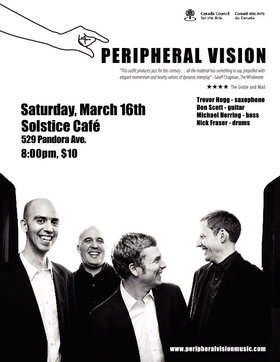 Peripheral Vision is one of the most exciting and innovative jazz quartets to have recently appeared on the international jazz scene. Based in Toronto, the creative leaders of the group are long time musical collaborators, guitarist Don Scott and bassist Michael Herring. They have assembled a synergistic musical unit designed to push the boundaries of jazz while engaging the listener with a grooving, toe-tapping immediacy. Their distinctive musical voice bridges tradition and innovation, with deeply felt influences ranging from Wayne Shorter, Booker Little, and Charles Mingus, to David Binney, Kurt Rosenwinkel, and The Bad Plus.

Peripheral Vision was recently featured at the Montreal Jazz Festival, where Scott's piece, Backbone, took home the Galaxie Rising Star Award for best composition. They maintain a busy touring schedule supporting their new album, Spectacle: Live!, as well as their eponymous debut - both albums ranking in a number of critics' year-end lists. Scott and Herring are joined by saxophonist Trevor Hogg and drummer Nick Fraser. While the compositions are Herring and Scott's, Peripheral Vision is defined by its group rapport. Bringing back the anything-is-possible democratic approach of both 1960's jazz and garage bands, the music takes shape as a collective process. This no-holds-barred philosophy is at the root of Peripheral Vision's explosive performances.

“This outfit produces jazz for this century… all the material has something to say, propelled with elegant momentum and hearty rations of dynamic interplay.” - Geoff Chapman, The Wholenote

Top Ten Canadian Jazz Albums 2010 & 2011:
"Peripheral Vision are making exacting but emotional music that nimbly relays complexity in a heady but appealing way, and with Spectacle: Live!, they demonstrate that they can pull off their magic in real-time." - Peter Hum, The Ottawa Citizen

"This group has tremendous cohesive power, a storehouse of original ideas delivered with gusto and confidence. Each piece is a musical statement combining beauty and impact." - Irwin Block