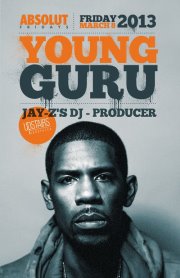 So we decided for all that you guys do for us we should do something MORE for you.
ABSOLUT Fridays! are already your favourite Friday night in Victoria with our resident DJ Speedyshoes.........BUT we decided to tak it a little further.
GRAMMY Award winning YOUNG GURU takes our stage Friday March 8th to provide a Friday you won't soon forget while costing you nothing more than the normal price of admission!

Artists need their people. Gimel “Young Guru” Keaton is Jay-Z’s people. When the rap-conquering MC and mogul steps into the booth, Young Guru is outside manning the board making sure his rhymes are as audibly correct as they are thought provoking. Since 1999- a staggering twelve years- this has been the way of things. Along the way, Guru has pretty much recorded every other A-list MC. Some say he has the midas touch.
Revered as “The Sound of New York,” Young Guru possesses over a decade of experience in sound engineering, production, and A&R for the acclaimed Roc-A-Fella Records and Def Jam Recordings. Most recognized for shaping some of the biggest talent in hip hop, Young Guru has mixed 10 of Jay’s 11 albums, and has earned himself a number of shout-outs on Jay-Z’s tracks paying homage to his exceptional skills behind the boards. Young Guru officially became Jay-Z’s tour DJ in 2010. It is an endeavor well-suited for him, considering his impeccable knowledge of Jay-Z’s discography, and their long-standing personal and professional relationship. With such a successful track record, there is no question why Young Guru is the DJ of choice, the instructor of the creative, and a producer of timeless music.