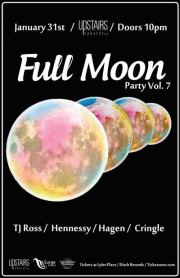 For almost two years now Upstairs has been hosting Victoria's biggest Full Moon bashes and now we're going extra big on this one as a celebration!!!

This is going to be a special Full Moon Party - We are decking out Upstairs with wild visuals, body paint, and bucket specials. Not to mention a stacked, 4-DJ line up!

Get them while supplies last at:
Lyle's Place | Ditch Records | Ticketzone.com (url link below)

DJ Hennessy discovered the underground music scene in early 2000. This new passion led him to move to Vancouver and then to Sweden where he perfected his tastes and his knowledge for the electronic music scene by surrounding himself with the best international DJs and producers.

Once back to Victoria, DJ Hennessy’s overriding passion and track selection for house music got noticed fast. His meeting with DJ Mr Clean shaped his mixed style. Since 2009, DJ Hennessy has been combining sounds and vibes of multi-genres Brazilian House, Tech, Progressive, Trance, Electro and Disco House, which are all expertly tied together creates hours of dazzling sounds.

Sam is an up and comer in the Victoria scene. Originally from the mainland, the island caught his eye and he hasn’t looked back since. He has opened for huge acts such as Porter Robinson, Morgan Page, JFK (of MSTRKRFT), Felix Cartal, Congorock, AN21 & Max Vangeli and many more, solidifying his presence in Victoria. He now holds a weekly residency at Boutique Lounge and continues to impress with his ability to captivate dancefloors. His style can be best described as highly energetic and this is seen throughout his live performances. Sam’s love of electronic music has now allowed him to expand in to the world of production. Look out for some original productions and remixes in the near future.

Tyler spins a hype blend of EDM and can rip up any decks around. The always exciting UVic DJ is no rookie to the game and definitely one act not to miss.