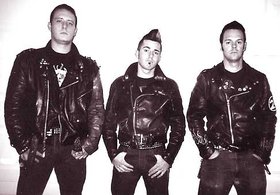 Event Archive - The return of the Koffin Kats: Koffin Kats, Blackie and the Triumphs, Bastard Son

The Return of the Koffin Kats! With over Nine years of touring internationally and 1200+ shows, the Detroit based Koffin Kats new home is on the road. This trio kicked it off in June of 2003 with the mission to not stop for anything. Vic Victor (Lead Vocal, Upright Bass) would join forces with long time friend Tommy Koffin (Guitar) and start laying the ground work for the sonic assault known as The Koffin Kats.

They put together songs with subjects ranging from Sci-Fi to dealing with the horrors of the real world. With Eric “E Ball” Walls (Drums) they began in small local bars playing for beer and eventually made their way out of the Mid West. The next couple of years proved to be up with numerous North American tours and down with drummer changes. During this time they released their first three albums - S/T (2003), Inhumane (2005), and Straying from the Pack (2006).

These releases and the tours caught some attention and helped get the name of ”The Koffin Kats” noticed in the wide world of punk & psychobilly. In 2007 Vic and Tommy hooked back up with Eric to get ready for the fourth album, Drunk in the Daylight (2008), and began what the Kats are now known for… NON STOP TOURING & TRYING TO MAKE EVERY SHOW A PARTY. With their love for their fans and for the road they set out to play everywhere willing to listen to them.

In the recent years they have been able to make a name for themselves in Europe as well and have been included on tours with some of the tops acts in psychobilly such as Mad Sin, Nekromantix, & The Meteors. In 2009 they released “Forever For Hire” and at the years end Tommy left the band to pursue a normal life. Shortly thereafter EZ Ian Jarrell took over the guitar and hopped on tour. While on the road they worked on material that would become featured on a split album with The 12 Step Rebels in released in Spring of 2011.

Now The Koffin Kats are currently on a North American Tour and have signed with Sailors Grave Records to release the next full length "Our Way & The Highway" in January 2012. Joining them are Victoria's own Blackie & The Triumphs guests Bastard Son.

Blackie and the Triumphs are a HIGH energy, 5 piece band dedicated to the art of drinking and drinking songs.
The band includes Blackie LeBlanc on guitar and vox, Spider on stand up bass, Brainzz on drums and fire blowing, Mel on back up vox, interperative dancing and cowbell and Shelby on back ups, tap dancing and drink mixing artist.

Bastard Son
They make heavy music that your mother wouldn't like and also do a sweet cover of Mr. Roboto on keyboards!

Blackie and the Triumphs (drinking music)

Blackie and the Triumphs are a HIGH energy, 5 piece band dedicated to the art of drinking and drinking songs. The band includes Blackie LeBlanc on guitar and vox, Kytami on electric fiddle, Spider on stand up bass, Brainzz on drums and fire blowing, Mel on back up vox, interperative dancing and cowbell and Shelby on back ups, tap dancing and drin... more info