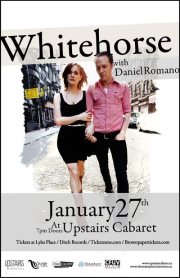 The classic tale of musical romance continues for Luke Doucet and Melissa McClelland, the husband and wife duo behind Whitehorse.

The Fate of the World Depends on This Kiss is everything the talented pair’s first full length promised. As a whole, the album reveals the expanding range of creative possibility as Whitehorse develops and focuses their sound. Song by song, the record takes surprising turns; while each track bears Whitehorse’s signature blistering guitar work and love-knotted vocals, their willingness to take risks while staying true to themselves makes for captivating listening.

From the opening track, the psychedelic-meets-Spaghetti Western scorch of “Achilles’ Desire” to the sunset-on-water acoustic sparkler “Mismatched Eyes (Boat Song),” the Archies-esque “Out Like A Lion,” (sweetened with a dash of "Sugar, Sugar"), and the pulp influenced suspense of "Devil’s Got A Gun,” the album covers impressive ground without compromising its artistic coherence.

Whitehorse’s live show is built on mesmerizing guitar work and smoldering vocal chemistry, but also brings much more to the stage with complex layers of percussion, keyboard and telephone receiver amplification, tangled like an embrace with the help of looping pedals. Their sold out Winter Garden Theatre show in February, 2012 signaled their unquestionable arrival as a band. Whitehorse returns in ambitious fashion with a date at Massey Hall in 2013.

With savage talent and tender hearts, Whitehorse expertly plays both lion and lamb on The Fate of This World Depends on This Kiss.
Six Shooter Records is proud to release this fine album on August 28, 2012.

Daniel Romano is difficult to work with. He has very little or no understanding of the music industry. He is very hard to get in touch with.

He runs a record label (You’ve Changed Records), has a platinum record for production (City and Color’s Bring Me Your Love) and a Juno nomination for graphic design, but his greatest satisfaction comes from the music itself.

Daniel has been in the critically acclaimed band Attack in Black for seven years now and has been very successful with his endeavors with this band. Now, for the first time he is branching out into a solo career. Daniel has created a heaven for himself in his basement with a fully functional 2″ 16 track studio and is constantly in production mode. His music is simple, quirky and honest. It contains elements and influences from his childhood and from his parents; folk tinged ballads and country music paralleling the works of Hank Williams and George Jones.

The albums are classic, not only in the song writing but in the production as well. Daniel's recordings, feature performances by his father (David), his aunt (Darlene), his love (Misha) and a family friend (Natalie).

Since their debut in 2011, Toronto’s Whitehorse has evolved from magnetic folk duo to full-blown rock band. In truth, Whitehorse is never fully either one or the other, but an ever-evolving creative partnership between Melissa McClelland and Luke Doucet. As five consecutive JUNO nominations in four categories attest, whether it be a holiday a... more info
Submit info on this show to our admins