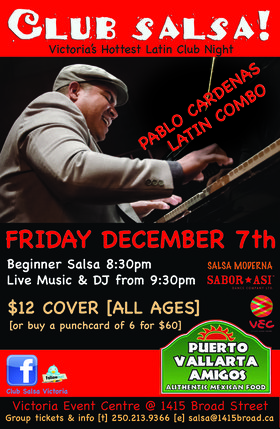 Music: Folk / Celtic / Latin / World
Club Salsa will now be presenting live music each and every time! For the month of December we are pleased to present the Pablo Cardenas Latin Combo.

Pablo is a pianist with the ability to play in a multitude of styles each with enthusiasm, skill and finesse. He has a charisma and charm that both intrigues and entertains his audience.

Pablo has performed Classical recitals in the most important theatres of Cuba including the famous Amadeo Roldan Theatre and Federico Garcia Lorca as well as collaborating with many music projects and accomplished musicians including Matanzas sinfonic orquestra, singer Leo Vera and groups like Mambo Club International Jazz band as well as his own jazz project performing jazz, fusion, Latin jazz, traditional and contemporary Cuban styles. This young pianist have played at the most famous events and venues in Cuba such as the International Jazz Plaza Festival,International Contemporary Music Festival and clubs including Casa de la Musica, Jazz Club Zorra y el Cuervo and many others. Since arriving in Canada in 2010 he has been teaching and has performed with Gergana Velinova, Adonis Puentes, Maureen Washington, Phil Dyer, Damian Graham, Sara Vardy, Miguelito Valdes and many others accomplished musicians. Pablo also has his own music projects including his Latin Jazz Combo and Fusion Ensemble who recently performed at the Victoria Jazz Festival 2012.

Club Salsa is an important fundraiser for the Victoria Multi-Cultural Society. All profits are used to keep the traditions of Latin music, dance and culture alive in Victoria and provide an opportunity for musicians and dancers to perform. Club Salsa is also a gathering place for the Latino community where cultural events can be celebrated.

Pablo Luis Cardenas is a pianist with the ability to play in a multitude of styles each with enthusiasm, skill and finesse. He has a charisma and charm that both intrigues and entertains his audience. This talented musician originates from Cuba and was destined for a life in music after his hands first touched a piano at the age of five. When he... more info
Submit info on this show to our admins