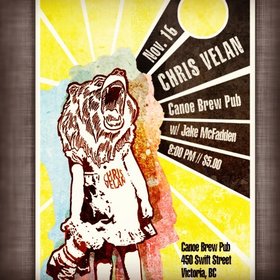 Music: Reggae / Ska / Dub
This is a Special show @Canoe.
Chris Velan is a Montreal Singer Songwriter who discovered Sierra Leone's Refugee All Stars and Produced their First Album.
HE's been recording with artists on Jack Johnsons label Brushfire records and he was in EQUALIZER. The best Canadian Ska/Reggae band ever.
Thats right I said it. don't believe me? I'll burn their album Rise and give it to you. They were Epic.

Anyway, the show is kicked off with Musician Jake McFadden (myself) followed by two wonderous set's by Chris Velan.
I'm fucking Stoked.