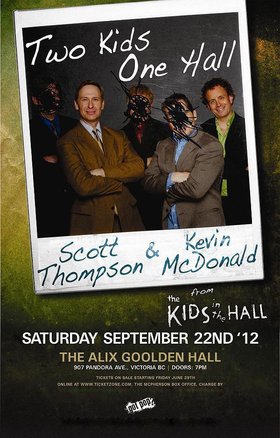 Music: Theatre:
TWO KIDS ONE HALL
(Scott Thompson & Kevin McDonald from Kids in the Hall!) at The Alix Goolden Hall

Got Pop? is also bringing Two Kids One Hall to Nanaimo (Sept.. 20th at The Port Theatre) & Courtenay (Sept. 21st at The Sid Williams Theatre)

Kevin McDonald explains -- as only he can -- his current U.S. comedy act with Scott Thompson. They're calling it "Two Kids, One Hall."

"They could only fit two-and-a-half of us," he says, "So we fired two-and-a-half, and the other guy didn't want to come as a half. After some contract negotiation, it became Scott and I."

Longtime fans of the legendary Canadian sketch comedy group know the full cast as also including Dave Foley, Bruce McCulloch and Mark McKinney. (McDonald didn't specify which of these three was asked to be half a man on the tour, but the smart money is on Foley.)

From 1989 to 1995, the Kids in the Hall enjoyed TV success, and many of their sketches and phrases have become a part of pop culture lore. For instance, if you've ever crushed somebody's head, you, sir, have enjoyed a Kids in the Hall moment.