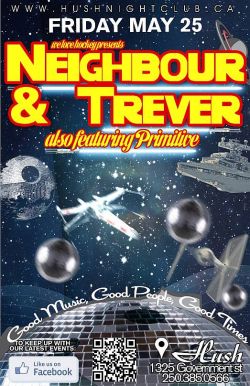 Matt has lived and breathed music since he busted out the cradle. At age 5 he would cajole strangers with his beloved ukulele, progressing onto guitar and bass as time went on. After learning to play saxophones in the jazz band and plying his trade as a music teacher throughout high school, he moved on to Mount Royal College where he took part in the Jazz Studies program on guitar. Through it all, Matt developed his recording skills alongside his instruments, learning on the classic four-track Tascam and moving onto serious multitracking and computer sequencing. A strong love for Funk, Soul, and Disco developed as he worked at local record stores and sure enough, these elements are ever present in his Groove-Drenched productions. These days, when he's not producing or teaching music for Home Breakin' Records, he spends his time playing gigs around town with various bands, DJing, and digging for the next break to transform into Funky Black Gold.

Straight from tha hood… Gordon hood Victoria that is! DJ Trever has been droppin’ science for many many moons now. Currently you can hear him play Saturday at Touch in the heart of Victoria. Trever plays the Funkiest Old Skool Party Jams to make you bump and grind, as well as creating some of the Dopest Mixes on fly. He scratches like a he don’t care n’ definitely turns a party out! He's played along side many great DJ's: Afrika Bambaattaa, Mark Farina, David Alvarado, Thomas Michael, Malente, Atomic Hooligan, Donald Glaude, Mat the Alien, Czech, and Miss Moneypenny. He's toured across New Zealand a couple times, played in Mexico, blasted in Amsterdam, got lost in Bermuda, spanked in Fiji, and crushed it in Detroit… Bottom line is…this DJ will "ROCK YA PARTY”!!

DJ Primitive has held residencies in Whistler, Vancouver and Victoria playing everything from down-tempo mash ups to disco rap and Electro, from acid jazz to Chicago house. Expect deep tech house to jackin funk, booty bass and festival rockers- Primitive will take you where you need to be. http://www.soundcloud.com/primitive http://www.hushnightclub.ca