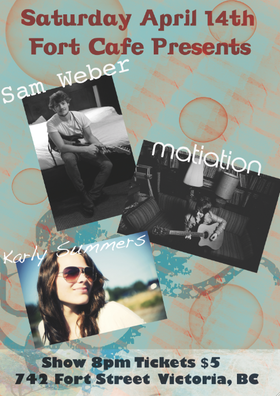 Music: Pop / Rock / Indie
Come out to the Fort Cafe for a night of great live music.

What Sam Weber lacks in years, he makes up for with masterful guitar and a soulful voice. At 18 years old, Sam is no stranger to the Vancouver Island music scene. His influences run deep; from soulful blues and vigorous guitar stylings of Stevie Ray Vaughan to the intellectual alternative melancholic ballads of Death Cab For Cutie. Sam’s primary focuses are guitar and voice but he also dabbles on the piano. This past year, he had two original songs featured on Fresh Cup Coffee’s “Feed the...

Matiation is from Southern B.C. and with the work of producer Doug Naugler (Kyprios, Gaye Delorme, and Todd Fancey). Matiation has just released her 2011 “The Ripple Effect E.P” for sale. This E.P. exposes the essence of her personal experiences, tucked into the contemporary pop genre, Matiation's “The Ripple Effect E.P.” blends youthful vocals and upbeat, eclectic guitar rhythms. http://www.matiation.com

"Conveying her feelings with a peaceful voice and well crafted melodies, this 18-year-old singer-songwriter delivers a fresh mix of poppy, yet sophisticated, acoustic rock. A familiar sound with a new touch from a girl you won't soon forget; Karly Summers captures hearts as she lays her own on the table within her relatable and reliable lyrics." -Jeff Gargas, President of FTF Records, http://www.ftfrecords.com