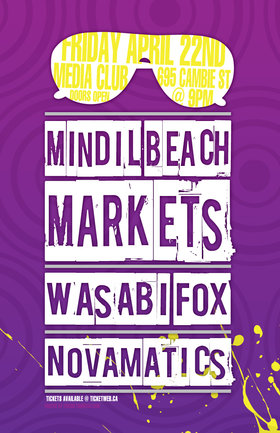 Music: Pop / Rock / Indie, Reggae / Ska / Dub
Chase some bunnies down to The Media Club Friday April 22nd and come party with us!

Explosive, dynamic, and original, Mindil Beach Markets has discovered a blistering fusion of Rock, Reggae, Hip Hop, Folk, Funk, and Blues that is entirely their own. Their songs will leave you awash in sentiments ranging from love of the planet, to love of a good party.

Wasabi Fox was formed in late 2009 by the rag tag group of Marlon Strang, Brandon Speight, Nigel and Travis Wall. All native Bowen Islanders, they have been playing together for years but recently decided to get serious and put together a band generated by original fun music.

The summer of 2010 was the best of times (and the best of times) for The Novamatics, a Victoria based reggae/dance septet. After a few days recording their demo with Wynn Gogol at 1-Ton Studios, the gang burned, stamped, and sleeved over 1000 cds with their own hands and set off to spread the magic! In what some would classify as a “deathtrap” tour van, The Novamatics eagerly embarked on a whirlwind two week BC tour playing to such diverse yet equally enthusiastic patrons at The Grill and Chill Music Festival in Courtenay and The Grilled Fromage in Squamish. At the end of a jam packed tour wrap-up show in Victoria, which saw The Novamatics frantically burning more cds in the green room to keep up with demand, the boys came to a conclusion: There is nothing better than writing music, playing it live, and watching the crowd groove on the dance floor.

8 piece skansemble that will drop the heat on your meat. more info
Audio: Let it Out, Show me the Way Home
Submit info on this show to our admins