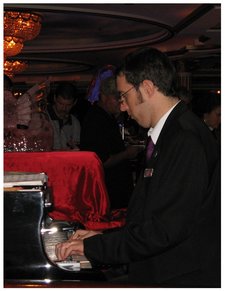 Jazz, Latin, Blues, Classical, among others from Victoria BC
Instruments: Piano/Keyboards details

Sam Shumka has been playing the piano since the age of six. His teachers have included Adrienne Shannon, Edward Parker, and Bill Costin. He has completed both an ARCT Diploma in Piano Performance and a Bachelor of Music degree in Classical Piano Performance.

Mr. Shumka has considerable professional experience for someone of his age, backing up artists such as Rosie O’Donnell, Lorna Luft, Audra McDonald, Elvy Rose, and acts such as Livewire. He has worked as a show band musician for Carnival Cruise Line, Holland America Line, and Norwegian Cruise Line. He has also performed as a piano bar entertainer and instrumental pianist and accompanist for Norwegian Cruise Line.

Mr. Shumka is currently in demand as both a show band musician and a jazz musician for various venues and cruise lines. He currently tours with his own band Red Clay with bassist Allana Benner and drummers Phil Schinbein and John Androsky. As a classical musician, his skills are sought after by musicians throughout Western Canada.