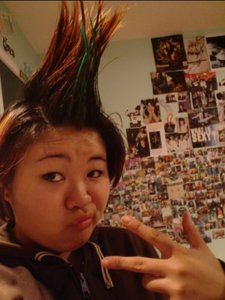 I went to switch band (three times) for the switching of the instruments. First time, I tried switching to Flute, decided didn't want to play that for band so I didn't (but I play my friend's flute every so often). Second time, I switched to tenor sax, which I stuck with, to play it in junior concert and junior jazz band, for grade 9. The third time I switched to bassoon, and that's what I'm currently playing in Junior and Senior concert band, and for junior jazz band I'm still playing the tenor sax.

I take lessons at Larsen Music for Bass and Acoustic guitar. I've been taking lessons there since the summer of 02'/03'.

The piano is the longest instrument I've been playing. I've been playing it since I was in grade 1 (95/96). I use to take lessons at the Victoria Conservatory of Music. I stopped in 2004, but now, I started up lessons again during 2005 for just contemporary stuff, but my teacher was a creep so I dropped the lessons, and is currently looking for another teacher.

I'm currently in two bands. One's going pretty steadily, and the other one was just more of a casual jam session, we had a few songs but never played through it all. And now, I think they're ditching it, which is a shame.