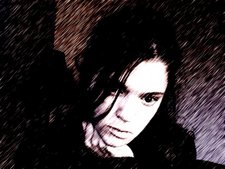 21 year old wife and mama. Goals... to make music and share it. If I make money doing so, bonus! My voice has been compared to Loreena McKennitt, and Amy Lee, and my music and vocals have also been compared to Joan Baez.
Influences are far too many to count, but I have been most recently influenced by Regina Spektor, Mae Moore, Shari Ulrich, and Ani DiFranco.