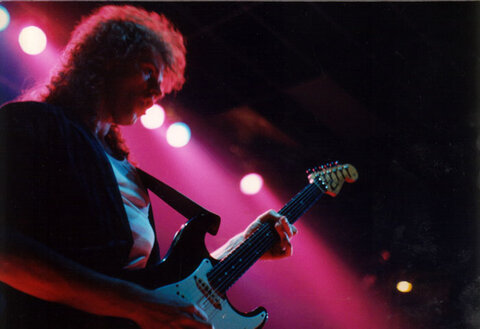 Born 1955 Toronto. Grew up slogging the Ontario bar scene in the 70s; touring eastern North America like a maniac in the 80s; and continued the insanity into the 90s and beyond. Genetically born a classic rocker, but will play anything people can drink to ;-). Collector of Canadian music, guitar toys and all musical experiences. Credos are: "my amp goes to 11", and "if you don't sweat buckets on stage, you haven't done yer job" :-). Influences go right back to 1969 when I first started playing at age 14 learning/listening to Led Zep, Hendrix, Purple, The Who, Queen, Cactus, Free, Grand Funk and anything remotely intense; to power pop in the 80s, to an amalgamation of everything from my roots in the current day. Single favourite guitar player is Robin Trower (with Leslie West and Joe Walsh close seconds ;-).

The first 1957 "factory black" Fender Stratocaster I bought when I was 16 years old for $250. Growing up in the heyday of the Toronto rock & roll scene with so many incredible musicians plying their trade in a time when rock music was a true passion and way of life. The honour of being able to call so many of those players good friends to this day. The first recording session I ever did at Phase One Studios. The 1985 "Mach IV" recording works featuring Doug Baynham [vocals], Kim Hunt [drums], Chris Brockway [bass], and people such as Terry Watkinson [Max Webster] as guest players; and the absolute pleasure and honour of hearing the songs I'd written being performed and recorded by such an incredible cast of musicians. In Victoria, the pleasure of a musical kinship with vocalist Niki Neff that has kept me sane, grounded and delighted to play with such a dedicated and talented singer.

Main musical highlight: the sheer passion and joy of playing rock & roll guitar . . . hopefully with a style and personality I can call "my own".

The break-up of The Dirty White Boys in 1991. Never having had my songs widely released on LP (having come close many times). Turning down the "sweetheart" offer from Brian Allen's management company [he of the band Toronto, producer extraordinaire, internationally renowned writer] in 1986, that could have lead to nationwide exposure and a true shot at the "big time". Seeing good musical friends fall prey to the demon drugs and/or alcohol.

Main musical lowlight: witnessing the demise of the Victoria music scene from a dynamic and major force on the West Coast, into the inconsequential and pathetic shell of a music scene it is today. Shame on the 320,000 people of all ages living in the CRD who have neither the motivation or interest to demand and attend a vibrant and substantial musical environment.

Toronto band circa 1982 to 1985. Lead guitarist for the year 1983. Featured former members of Abraham's Children.

Under A Blood Red Sky

Toronto band circa 1982 to 1987. Subbed as the alternate guitarist for numerous gigs and small tours.

Toronto, approximately 1992 to 1997. Continued to perform live gigs with various acts and artists; continued to write numerous songs; and undertook recording work in a variety of studios. Attending college from 1993 to 1996 and received an Honours Diploma in Corporate Communication at Centennial College in Toronto (in the event of the need to "rotate" back to the "real world" at some yet to be undetermined time :-). 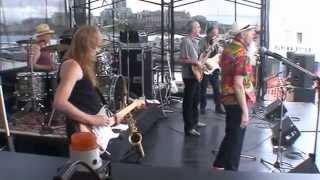 Excerpts from Preston McCool at the Victoria Blues Bash 2014