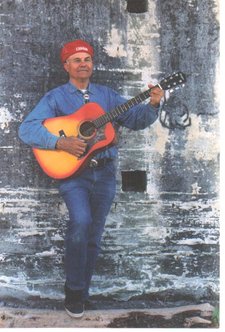 http://www.freddiebear.ca
country from Victoria BC

I was born in Derwent, Alberta, a small mixed farming district northeast of Edmonton, Alberta. During my early twenties, farming was my livelihood and music my passion. In the 50's I began writing songs and organized a five-person band, the 'Jamborie Boys'. We enjoyed playing for weekend dances and weddings. During our fifteen years as a group we produced our first 78. Music brought the local farmers together in celebration of our country heritage.

Once married, I continued to farm until 1967 when I moved with my family to Victoria, BC and began training for my welding ticket. My music was temporarily shelved. Four years had passed when we relocated to Mackenzie, BC, a small northern mill town situated near Prince George. This rocky mountain town was to be my home while the kids were raised.

Mackenzie, a mountain community far from the plains of Alberta. Retirement posed the budding opportunity for me to regain my country roots and revive my songs which are so dear to my heart. I now reside in Mill Bay, which is thirty-two miles north of Victoria, BC.
I've been inspired by singers in my early day's, including Wilf Carter and Hank Williams. More recently by George Fox, Garry Philgard, Prairie Oyster, Allan Jackson, Kenny Rogers, Lone Star, Tim McGraw, Willie Nelson and many others.

I welcome you to enjoy these songs and reflect on the traditional country vibe of my youth.