Pauline writes and sings from personal experience. A transcendental meditator since the age of nine, she has a genuine desire to inspire her listeners to explore their own life experiences, and to discover the potential for positive change through realization and acceptance.

Her newest release, ‘Exchanges With Self And Others,’ is a collection of 38 poems inspired by nature, spirituality and relationship. With a strong belief in the connection between dreams, waking life, and the spiritual self, Pauline assumes a world of non-linear time, collective consciousness, and balance in this 60-page self-published book.

‘Exchanges…’ follows her debut studio release ‘There Comes A Time’ written and recorded in Pauline’s home town, Victoria BC, and produced by Eric Hogg (Soma Studio). The album introduces Pauline as a uniquely talented lyricist, composer and performer, and weaves together her influential heritage, extensive training and confirmed performance ability. In the Spring of 2009, Pauline also released her first music video for the song ‘Pampas Grass’, in collaboration with Director Andrew Marchand, a film student at Concordia University in Montreal.

Born to a Canadian mother and Trinidadian father, Pauline grew up listening to steel drum renderings of the great calypso, soca, classical, and jazz standards that her father would play. She absorbed a unique sense of tonal mix and improvisation by sitting under, leaning into, and singing along with her dad’s drums, and by falling asleep to these sounds every night for over fifteen years. Pauline's voice has been compared to the likes of Jann Arden, Bjork and Sinead O’Connor. With influences ranging from Bach to Radiohead, her music reveals a matured personal style that sings to the melody of the soul.

As a classically trained violinist, Pauline has had the opportunity to collaborate with some of Canada’s top artists, including recording and performances with GREENLAW (Formation Records Group) and LAL (Public Transit Recordings). She has been touring in Canada as a singer-songwriter since 2006, and was a regular member of touring folk-rock group The Caroline Spence Band from 2006-2009. She has also performed extensively with Folk-Noir musician James Kasper, and lends violin to his recent recording of ‘somewhere over the rainbow.’ 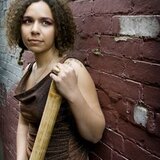