Electric cellist and vocalist Jami Sieber reaches inside the soul with compositions that are contemporary, timeless, lush, and powerfully evocative. Her style of performance has been recognized internationally. An innovative musician, Jami’s music moves beyond the surface, seeking and re-seeking her truth by creating musical bridges and connections, committed to doing what moves her and inspiring listeners with her honesty, musical prowess, and humanity. Her life-long commitment to the environment, social justice, and the healing arts is at the heart of her music, reflecting a deep dedication to the arts as a medium to express the interconnectedness of all beings.

Sieber now stands fully in her own genre-defying musical style and while investigating Jami’s recordings you will be captured by her creativity and imagination as a writer, lyricist and instrumentalist. Each recording is a sonic journey exploring the breadth and magic of the acoustic and electric cellos, with compositions that will open the heart, defy the mind, and, at times, inspire body and spirit to dance. Jami’s independently produced recordings include: ‘Big Joy: Original Motion Picture Soundtrack’ (2014), ‘Timeless’ (2013), ‘Unspoken: The Music of Only Breath’ (2008), ‘Only Breath’ (2007), ‘Hidden Sky’ (2004), ‘Second Sight’ (1998), and ‘Lush Mechanique’ (1994). Victory Music says, “…these musical paintings hang, framed in her own passion and dreams. If you’ve ever taken a journey of the soul, be it to another place or your own backyard, this music will play back every scene.” 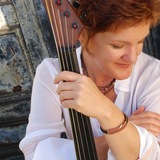