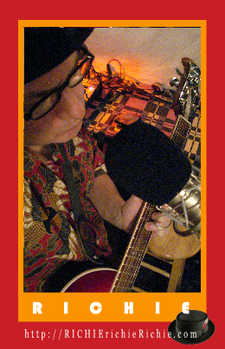 Richie's grandfather played piano for silent movies, and his mother was a school music teacher. Richie was lucky enough to inherit some of these music genes and has played guitar since his youth. In the 70's he played trumpet in a rock band brass section and toured. Later he mixed sound professionally in Vancouver and in Victoria, British Columbia - his birthplace. He has also played solo gigs and enjoys collaborating, creating and performing.