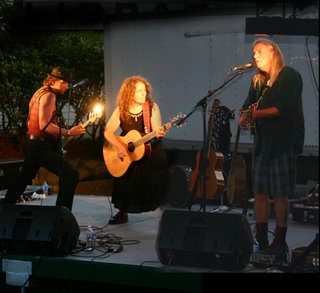 The Ecclestons
skog@uvic.ca
(250) 721-5091
Contact Info
Past Shows (56)
‘Full Contact Folk’ best describes what The Ecclestons bring to the stage.
After fourteen years together as a band touring all over Western Canada and the US,
siblings Colleen (guitar and vocals) Kelt (bass, penny whistle, and vocals) and adopted brother Greg Madill (bouzouki, mandolin, bodhran and vocals) have been busy doing their solo projects for the last few years. They have recorded 4 CDs together.
Away from the stage they are actors, ex postie, travellers, professors, parents and grandparents and they bring that depth to their writing always exploring the human condition.
Their collective energy is profoundly life affirming.
They are a folk band in the true sense of the word playing music of the people.
Known for their infectious humour, joyfulness, and harmony, this Victoria based band has a massive Celtic and Canadian repertoire alongside solid songwriting tackling everything from ‘bombs falling from the sky’ to the fires raging in Alberta and Montana, to siren’s song and dancing outside on a summer night.
Growing up in the nomadic tradition of University and Air force brats they have lived all across Canada and beyond bringing a deep worldliness to what they do.
Past winners of ‘The Best Live Act on Vancouver Island’ MPower Award, they are back with new songs and it feels great to be playing together again!
Bring on the adventure! See you at the show!
No audio samples have been linked to this profile. 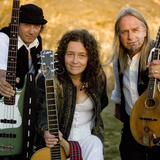 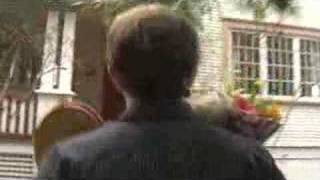 Life Goes On by The Ecclestons

In this Video Artist(s) The Ecclestons
Posted: Jan. 27, 2019
Status: Available for Shows/Gigs
We have 4 cds out to date as well as our solo projects. Our live shows consist of Original Concert sets, Celtic sets, and educational show for school age children. We have toured extensively throughout Alberta, British Columbia, Idaho, Montana, Oregon and Washington. We are available and our rate is varied depending on engagement. We love to play festivals and all sorts of celebrations and events. Reviews: "The Ecclestons … A rocking reel, a Wee Celtic Cuddle and a Ballad that would bring a tear to a Glass eye… Pure Dead Brilliant" - Andy Donnelly, The Celtic Show- CKUA Radio Network "The sheer output of energy and humour are conveyed in every chord and syllable. There are original track from all three of the Ecclestons and their abilities are simply overwhelming. on 'Imbolc to Beltane' Naomi de Bruyn 'Linear Reflections' 'the remarkable power and range of Colleen's voice will leave no one untouched" Rootsfest The unplugged trio came off as a Celtic Peter, Paul and Mary injecting comedy and confidence in their infectious act . . ." Cowichan "The Ecclestons have successfully reached their own artistic dimensions" Keltika Magazine#13 Italy - Last confirmed Jan. 27, 2019
Submit info on this band to our admins