Terry Boyle from Dublin, Ireland, arrived in Canada in 1989 after a successful six- year stint playing music in Boston, New York, Vermont and Austin Tx. With numerous TV and radio appearances in Ireland, touring in Europe as part of a group, and a solo album of traditional Irish folksongs previously recorded, he released an album of original songs in 1997. Having given up his day job as a schoolteacher, Terry, who divides his time between Ladysmith and Victoria, now has the time and drive to create and present more music. “Life’s Too Short”, his latest CD of original songs, was released in November 2018.

Terry’s songs, stories and good humour, have endeared him to audiences far and wide. With a vast repertoire of Celtic songs, some teary, some cheery, some sing-along and some from the archives, Terry has a song or story for almost every occasion.
As a songwriter Terry’s style is varied, evolving and always entertaining. His songs are both autobiographical and descriptive of the complexities of modern life.
Terry looks forward to chatting with you and singing for you. 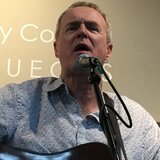