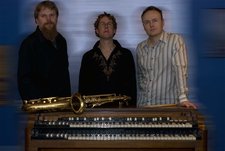 James Birkett
j_birkett@shaw.ca
(250) 216-7379
Contact Info
Grüüve Tube is a three piece instrumental groove project based in Victoria BC. The band consists of Eric Hughes (Tenor Sax), Tim Boss (Hammond B3 Organ) and James Birkett (Drums). Grüüve Tube's sound draws on the legendary organ trios of the '60s, the psychedelia of the '70s and the acid jazz/funk of the '90s. The members of Grüüve Tube are veterans of the Victoria music scene, having played with many well-established local artists. Eric Hughes (Eric the Red) is currently a member of the "Midnights Rhythm and Blues Band" and was a founding member of Victoria's "Solid 7" (with Kia Kidiri). He has also backed up Martha Reeves, and shared the stage with many world class musicians including Wynton Marsalis. Tim Boss was a long serving member of both "Auntie Kate and the Uncles of Funk" and "Soul Food". He is currently free-lancing with a number of bands around Victoria. James Birkett has previously served as a sideman for long-time Victoria musician Casey Ryder and has also toured and recorded with various artists including Sean Hogan and Alexis Puentes (both former Juno Award nominees).
No audio samples have been linked to this profile.
No member roster has been entered (to link to musician profiles.)
Status: Unknown
- Last confirmed Feb. 28, 2011
Submit info on this band to our admins