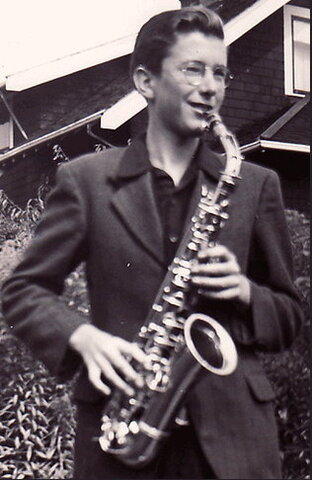 He moved to Victoria, British Columbia as a child, where he learned piano, clarinet, alto and tenor saxophones. After moving to Vancouver to continue a commerce degree, he played in bands led by Ray Norris, Dave Robbins, Paul Ruhland and Doug Parker as well as leading his own groups and eventually taking over the leadership of the Cave supperclub band. He took a year's leave in 1958 to study in New York, adding the flute to his list of instruments. He played on the CBC and won a Juno Award for Best Jazz Album in 1983. He was awarded the Order of Canada in 1987.

Throughout the 1960s and 1970s MacPherson was a first-call studio player in Vancouver, as well as leading the house band at the Cave supperclub. He also taught briefly in the Jazz and Commercial Music department at Vancouver Community College, where his students included future Powder Blues Band baritone saxophonist Gordie Bertram and New Orleans based saxophonist and jazz educator John Doheny. MacPherson's first album as leader of a small jazz group, Live at the Planetarium, was originally recorded for broadcast on the French-language CBC radio network. MacPherson leased the master tapes and released them on his own independent label, West End Records. The album was subsequently picked up and re-released on the Concord label, and MacPherson went on to record several other releases for them. He also recorded for Toronto's Sackville records and Montreal's Justin Time label.