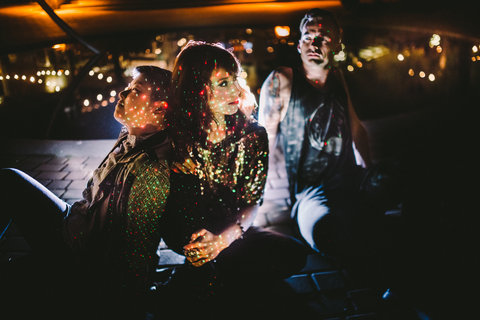 Their sound has been described as, “dance rock,” “power pop,” and, “the soundtrack to an alien abduction.” The band’s EP, Nocturnal, was released in August 2014 via Cordova Bay Records. Produced by Ryan Worsley (Dear Rouge) and Adam Sutherland (Acres of Lions, Vince Vaccaro), the EP features five original songs combining haunting vocals, dance beats and cosmic guitar riffs.
Fortune Killers exists to perform. Described by Victoria Music Scene as “one of the most entertaining local bands to watch,” Fortune Killers is widely recognized as a band that “has to be experienced live to be fully appreciated” (Ride The Tempo). Since the release of Nocturnal, the band toured nationally with performances at Canadian Music Week, BreakOut West, and Rifflandia Music Festival, opening for Sam Roberts Band, The Pack A.D., and Head of The Herd.

The band received FACTOR funding in 2016 and are currently working on a debut full length album due for release Spring 2017. New single "Fool's Gold", produced by Howard Redekopp (Dear Rouge, Tegan and Sara) will drop November 4th 2016
No audio samples have been linked to this profile.

Status: Available for Shows/Gigs
- Last confirmed Nov. 1, 2016
Submit info on this band to our admins