The Deb Rhymer Band features Kelly Fawcett on guitar, Clayton O'Howe on bass, Andy Graffiti on drums and Deb Rhymer on vocals. Deb and the band have played all the various clubs and pubs in the Victoria music scene as well as a number of blues events and festivals. The band has hosted an afternoon blues jam, every Sunday for the last 9 years which is currently held at The Hideaway Restaurant in the Tally Ho Hotel on Douglas from 3:30-7. Their first self titled album "The Deb Rhymer Band" has received a lot of airplay including the CBC Saturday Night Blues Show with Holger Peterson - From Texas to Chicago, to Louisiana and the blues delta, this band covers it all....
No audio samples have been linked to this profile. 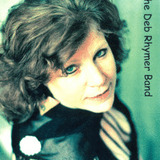 Status: Available for Shows/Gigs
- Last confirmed May. 9, 2016
Submit info on this band to our admins