cordie
cordell@rottenfiends.com
Contact Info
Past Shows (3)
In a time long before modern man, lived an ancient civilization of nothern barbarians who rampaged and pillaged the land. No one could stop the evil that consumed the land, so the great gods of the world, summon their most powerful demi gods to serve the kings of the region to restore order to the north. These Warriors were called DeathStalker, protectors of the land, who feed off the blood of the unrightious. Equipted with stronger blades than any blacksmith of all the world had ever seen, they clensed the land of all unoble vermin! Today they have come back, summoned by Crom himself to exterminate the pests known as musicians, with a brutal attack they call Crossover thrash!
No audio samples have been linked to this profile. 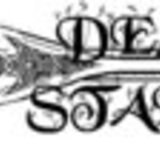 Status: Unknown
We require a new man to beat the war drum of death! - Last confirmed Aug. 23, 2009
Submit info on this band to our admins