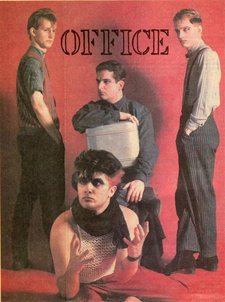 Channel Eau
infeau@channeleau.com
Contact Info
Past Shows (23)
Event Photo Galleries (3)
“OFFICE’s music is conducive to intellectual and physical involvement from the audience. This is a dance band for the thinking man.” - Craig MacInnis, Calgary Sun.

“Sadly, there are too few bands in this country playing this style of music.” - Bryan Williamson, Calgary Herald.

“OFFICE … is a master of musical mood and texture.” - Craig MacInnis, Calgary Sun.

“You need a stop watch for this band, it has so many starts and stops, so many asides within each song.” - Graham Hicks, Edmonton Sun.

“The effect is something approximating music for a nightmare – chilling and full of dire suggestiveness.” - Craig MacInnis, Calgary Sun.

“Edmonton-based OFFICE could possibly be the most aggressive and amusing band in Alberta right now.” - Craig MacInnis, Calgary Sun.

“One sodden drunk inadvertently gave the band a gem of advice, “Jesus will you play something we understand?” he bellowed.” - Graham Hicks, Edmonton Sun.

“The OFFICE rendition of Olivia Newton-John’s monster hit, “Physical,” is done the way it should have been done.” - Anthony Chau, Airtight.

“… the reception was warm - so warm, in fact, there was nary a still body in sight.” - Bryan Williamson, Calgary Herald.

“OFFICE’s snarling rendition of Olivia Newton-John’s “Physical” may be one of the best covers since Sid Vicious did “My Way.” - Mark Roppel, Gateway.

“They ended with a cheerful pillaging of Olivia’s Physical.” - Graham Hicks, Edmonton Sun.
No audio samples have been linked to this profile.

Status: Broken Up
- Last confirmed Aug. 27, 2012
Submit info on this band to our admins